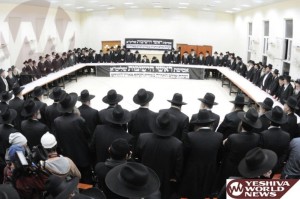 “We know how to get hundreds of thousands out into the streets of the city” stated the rav, who explained he was explaining the gadol hador’s position on ongoing efforts to draft bnei Torah into the IDF or national service. Rav Rosen followed the address from Rav Shteinman. He was also briefed by the gadol hador prior to the kenos, which was attended by over 100 rabbonim and roshei yeshivos as well as the rabbonim shlita of the Degel Hatorah Moetzas Gedolei Yisrael.

The Rosen began to explain the hashkafa of R’ Shteinman and he stressed repeatedly “there will be no compromise, not on a single talmid or avreich. The rav added there has been fear in the air during the past 18 months, since the disqualification of the Tal Law “and we have become accustomed to this” he explained. He cited the tremendous Siyata Dishmaya during this period, adding 1,200 talmidim were scheduled to begin military service today and they were pushed off for four months. He stated that R’ Shteinman feels that if there are no other alternatives then the tzibur will be ordered to take to the streets.

“If chas v’sholom there is no alternative as a last resort we can fill the streets. We know how to do this. We hope we will not have to resort to this but if need be, Maran the Rosh Yeshiva has stated it will be.”