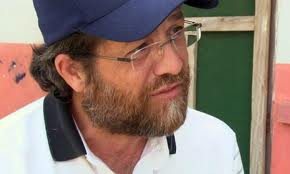 It’s a smoke and mirrors saga fit for Hollywood, complete with a major movie star, murky reports of a kidnapping and an American fugitive sneaking across the border of a far-away nation unfriendly to the U.S.

Little is being revealed about Jacob Ostreicher’s flight from house arrest in Bolivia and into the care of actor-activist Sean Penn.

The New York businessman arrived in the U.S. on Monday after an ordeal that began more than two years ago when he was detained as part of a money laundering probe into a rice-growing venture. His Orthodox Jewish family, associates in Bolivia and the State Department are all expressing a mixture of relief and surprise, and not much else.

No one is saying how the 54-year-old fled, or who helped him.

“You’ll never find out,” Peter Hakim, president emeritus of the Inter-American Dialogue in Washington, said Tuesday. If the U.S. was involved, “it was done through layers and layers of cover,” he said.

Penn, who last year traveled to La Paz and directly appealed to President Evo Morales to free Ostreicher, said a “humanitarian operation” had been mounted to extract the American “from the corrupt prosecution and imprisonment he was suffering.” But his statement in an email to The Associated Press gave no details on how that was done.

The State Department was equally circumspect, while family members said they were being kept in the dark and hadn’t spoken with Ostreicher.

Bolivia’s government was talking, its officials expressing outrage and warning they could seek his extradition.

Analysts said the chances of bringing back Ostreicher are slim. Noting he won media attention by denouncing from jail an extortion ring that reached into high levels of the government, some speculated his flight might have even enjoyed the government’s quiet consent. Bolivia had made no inquiries about Ostreicher’s escape as of Tuesday, the State Department said.

His whereabouts weren’t known. In the email to the AP, Penn said only that Ostreicher was safe, doing well and receiving medical attention in the actor’s company at an undisclosed location.

Ostreicher spent 18 months in a Bolivian jail without charge. He was held as a suspect in a money laundering investigation tied to efforts to revive the rice business that he had entered into with a group of Swiss investors. Ostreicher alleged the Colombian woman who was running the venture skimmed investors’ money and had ties to a Brazilian drug trafficker.

His plight attracted international attention in 2011 as he accused prosecutors of trying to extort tens of thousands of dollars from him to let him go.

With U.S.-Bolivia relations strained since Morales expelled the American ambassador in 2008, Penn was one of the few people Ostreicher could turn to. The actor was a frequent guest of the late Venezuelan President Hugo Chavez and a sharp critic of U.S. foreign policy — two qualities that endear him to Morales and other leftist leaders in Latin America.

After Penn intervened, Morales ordered a high-powered investigation that exposed an extortion ring that preyed on people accused of drug-related crimes. It led to the arrests of 15 people, include several prosecutors and a legal adviser at the Interior Ministry.

Ostreicher was let out of jail in December 2012 but barred from leaving Bolivia. A frustrated Penn vowed he wouldn’t abandon him.

“If it weren’t for Sean Penn I would be another statistic in Bolivia and I would die in prison,” Ostreicher told the AP a year ago, after previous efforts on his behalf by U.S. diplomats and lawmakers proved fruitless.

Bolivian Justice Minister Cecilia Ayllon said Ostreicher flew to Los Angeles from Peru’s capital, Lima. She said the conditions of Ostreicher’s house arrest had been relaxed, and he could easily have made a run for it on one of his regular trips to La Paz to pick up kosher food sent by his family. It’s only a short drive from Bolivia’s capital to the border with Peru.

Early on Monday, Ostreicher’s brother Aron contacted the AP saying he hadn’t been heard from for a few days and the family feared he had been abducted. Lawyers, associates and even the maid expressed similar concerns, but he apparently was back in the U.S. by then.

All of them said they had no idea he was plotting to escape and abandon his fight to recover the $50 million in farm machinery, cattle and rice that he claimed corrupt officials stole from him.

“He’s a fighter,” Aron Ostreicher told the AP. “He kept on saying: ‘Aron, you know me. I’m going for dignity. I want justice and I’m going to get it.'”

More recently, though, as Hanukkah approached and the case stalled, his physical and mental health deteriorated, family members said.

“He could have left a year ago,” said his former wife, Miriam Ungar, who blames the long ordeal for ruining the marriage. “But I guess he had to make himself ready to leave.”