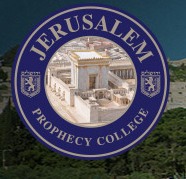 Under the name “Jerusalem Prophecy College”, missionaries are now distributing information that displays the official Jerusalem Municipality seal, perhaps lending credibility to such publications in the eyes of the naïve.

A HaMevaser report adds that Yad L’Achim has received many complaints by people from different walks of life, who received such pamphlets containing missionary material.

Yad L’Achim has been in touch with Jerusalem City Hall, and the city’s assistant district attorney, Danny Liebman reports City Hall has filed a police complaint for unauthorized use of the official city emblem. For those unaware, missionary activity is also against the law in Israel. One such pamphlet was included in an edition of the Jerusalem Post as a free insert.

HaMevaser contacted the J. Post and management expressed regret over the incident, clarifying they thought the material was harmless and they were totally unaware of the missionary content.

Yad L’Achim reports a similar case has been brought to the organization’s attention regarding a missionary publication using the Kfar Saba city emblem without authorization.