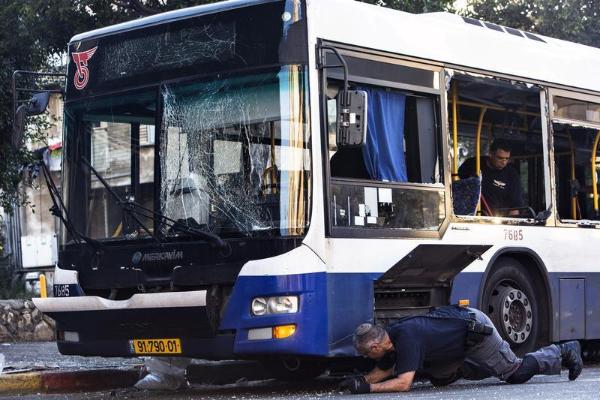 There were 15 passengers on the Bat Yam bus when one spotted the suspicious bag. The passenger told police he tried to open it and saw what appeared to be a pressure cooker pot and wires protruding. The passenger told the driver, Michael Yugar, a frum Yid who is credited with saving many lives.

Police crime scene investigators report it appears the bomb was about 5kg (11 lbs) and after it exploded, all of the bus’ windows were blown out.

When the first police unit arrived, the officers and Yugar worked to distance the passengers from the bus. It was then that the bomb exploded, injuring one officer lightly.

Police are quite confident the bomb was a terror attack. No terror organization has claimed responsibility at the time of this report.

UPDATE 3:21PM IL:
Police report the explosion on board a Dan 420 bus in Bat Yam a short time ago was an attempted terror attack, not a criminal incident. A final determination is yet to be made.

There was a measure of confusion regarding the number of the bus line, which is now being reported as 240.

After an alert passenger informed him of the package, he stopped the vehicle and ordered all passengers off the bus. Police are now reporting the bomb exploded before the bomb demolition technicians could begin examining it, hence it blew up on its own and it would have possibly claimed lives and/or led to serious injuries R”L.

An alert bus driver averted catastrophe in Eretz Yisrael on Sunday afternoon. A driver spotted a suspicious package on board a number 142 bus in Bay Yam. He summoned for police. At bomb demolition technicians were inspecting the device, it exploded.

Ichud Hatzalah reports one officer was injured. The extent of his injuries are unknown at present. The explosion occurred at the intersection of Mivtza Sinai & Katzenelson Streets in Bat Yam.

Dan Bus Company spokesman Eitan Fichsman reports an alert passenger notified the driver of the suspicious package, leading to him stopping the vehicle and ordering all the passengers to get off. The Dan message reports the explosion occurred on a number 240 bus.

The bomb was reportedly small. Israel Radio reports it was a 140 bus, not 142. The explosive device was found by the driver, who instructed passengers to get off the bus, thereby saving many lives.