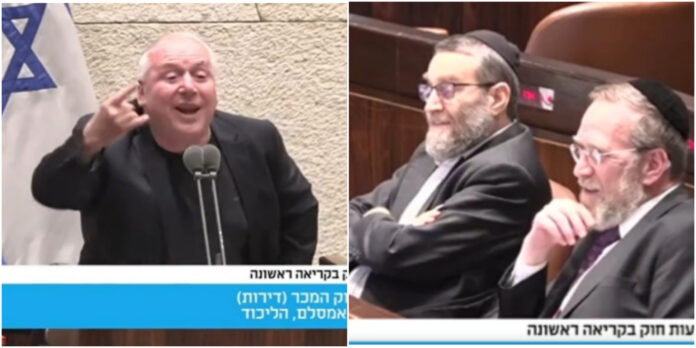 Likud MK Dudi Amsalem on Tuesday blasted Finance Minister Avigdor Lieberman in the Knesset plenum for his comments on Monday against limmud Torah and Chareidim.

“Lieberman says that kollel isn’t limmud Torah,” Amsalem said. “Since when does Lieberman know what Torah is?”

“You immigrated from Moldova with nothing. Who helped you? The Chareidim. So what did you do to them? You said they should be thrown in the garbage dump. That’s your trademark style of ungratefulness and hypocrisy.”

Amsalem was referring to the past, when Lieberman was buddy-buddy with the Chareidi politicians and channeled his hatred and vile rhetoric toward the Arabs. Somewhere along the way, he began attacking Chareidim and now sits in a coalition with Arabs and grants them billions of shekels.

Based on the video of the speech, UTJ MKs Moshe Gafni and Yitzchak Pindrus seemed to have greatly enjoyed it.