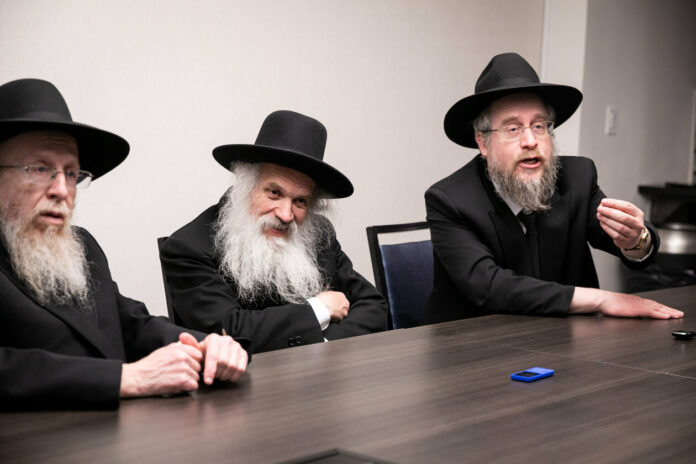 This past March, about a month before Pesach, Dirshu hosted an international conference in Connecticut. At a special session after Shabbos, leading Roshei Yeshivah gathered for a roundtable session to discuss ideas and strategies for sustained success in learning Mishnah Berurah.

The most expensive substance in the world is “buckminsterfullerene” — it costs a whopping $165 million per gram! However, those who participated in the Dirshu convention know there’s something even more valuable — time!

The convention went on for 46 hours with wall-to-wall sessions and lectures. That’s besides the fact that these participants generally have no free time, because they spend every free moment doing chazarah as they prepare for the upcoming test in their learning.

If that’s true in a typical year, all the more so this year — when the convention coincided with the siyum of the second cycle of “Daf HaYomi B’Halacha.”

Despite that, the Roshei Yeshivah gave of their precious time for a short but edifying meeting.

As soon as the havdalah wine and besamim were removed from the table, the radiant figures of the Roshei HaYeshivah arrived. We got straight to the point:

Question: Our mesorah, stretching back to Sinai 3334 years ago, remains unchanged and the study of Halacha is undoubtedly a central pillar in the transmission from generation to generation. In a little while, we’ll participate in the siyum of the second cycle of Mishnah Berurah of “Daf HaYomi B’Halacha.” We see the many thousands of Jews who are excitedly attending this momentous event. However, we know that not everyone who started the last cycle was zocheh to finish it. What can be done so that all who start this new cycle will be able, with Hashem’s help, to finish it?

HaRav Aharon Dovid Goldberg, shlit’a, answers with a question: Do you know if any of those who were successful learning the Mishnah Berurah failed to complete it? Can it be that one who got high marks on the tests fell out in middle?

HaRav Aharon Dovid Goldberg: Then we must reflect upon the possible cause or causes of those who suddenly stopped!

Question: Indeed, many factors can be pointed out, but let’s focus on two: 1) People who by their nature enjoy learning b’iyun more but enjoy less memorization of Halacha. 2) People with a weaker memory who have difficulty remembering the many details. How, then, can we bring about the love of learning Halacha for everyone?

HaRav Dovid Schustal: The first thing is to establish a set time, a zman kevua, for learning Mishnah Berurah. It should be non-negotiable. With consistency and persistence, studying the Mishnah Berurah is moiredik and geshmak!

Question: Is it possible to pinpoint the special geshmak one gets from learning Mishnah Berurah?

HaRav Dovid Schustal: Clarity — the clarkeite that one sees in the Mishnah Berurah is unbelievable! For example, when one learns a sugya in Maseches Eiruvin with the Mishnah Berurah and he sees how he learned the sugya and came out of it with an incredible clarity, it’s simply breathtaking!

However, I stress that it requires patience. In my youth, when I was still a young bachur, I saw what a geshmak there is from this study. But it takes time.

HaRav Aharon Dovid Goldberg: As a rule, when a young man learns Gemarah he feels a sense of self-expression — he has his own way of understanding the Gemarah. But in learning Halacha it’s less so. To connect to Halacha, one must find his niche, his way of learning that fits him personally, just like he does with Gemarah.

HaRav Nissan Kaplan: In my youth, I heard from Rav Shlomo Zalman Auerbach, ztk”l, that when he walked down the street and saw a stone, he’d ask himself, “What would be the Halacha if one were to trip on it,” and many other scenarios. That’s a great piece of advice — to live what you learn and make it a reality, to be constantly involved in it from your daily life.

HaRav Aharon Dovid Goldberg: At the beginning of learning hilchos Eiruvin, maggidei shiurim were advised to show real life examples. When there’s an example and the whole shiur is trying to figure it out together everyone connects to the learning. It’s no longer a question of hilchos Eiruvin that doesn’t apply to me. I’m partners with the others to understand the practical Halacha. The Ramban says in his Iggeres: “When you get up from learning a sefer, immediately search for ways to apply what you just learned.”

Question: What about those with a weak memory, who have difficulty remembering the many halachic details? One of the participants in the convention scores about 30-40% on the tests, and despite that he continues to insist he be examined — but not many are capable of that!

HaRav Dovid Schustal: What will strengthen them is the knowledge that even though they don’t remember all the details, they’ll still be ehrliche Yidden. Why? Because what they learned will come back to them when the situation arises. If they don’t remember the answer to the question, at least they know there’s a question! And they’ll know where to find out the answer. This very knowledge itself is very important!

Question: When does the seder Halacha take place in your Yeshivos, and for how long?

HaRav Dovid Schustal: At the Lakewood Yeshivah, it’s after davening for twenty minutes.

HaRav Aharon Dovid Goldberg: At Telz, too, the seder is after davening for twenty minutes each day. Today there are many kitzurim — “shortcut” Halacha sefarim — but we must look for ways to get back to the Mishnah Berurah!

HaRav Dovid Schustal: And the twenty minutes of seder should be “twenty minutes” — no less! Furthermore, on Rosh Chodesh when davening is extended it shouldn’t come at the expense of the study of Halacha. Consistency in this is extremely important.

The reality is that the Halacha and mussar sedarim are not the strongest, but it is precisely the role of the rabbeim in the Yeshivos to strengthen these sedarim.

Question: We’re talking about how to strengthen the Halacha seder, but how do we strengthen mussar seder?

The soundest advice is to strengthen tefillah, because tefillah is mussar. Maran Rav Yerucham, ztk”l, from Mir said that in the past they didn’t have to learn so much mussar because davening Pesukei D’zimra was a “shtik mussar”! A bachur must know that just like he must work hard to succeed in his learning Gemarah, he must work hard to succeed in tefillah! If a person makes tefillah primary he will grow from there to have yiras Shomayim, and true growth in mussar!

HaRav Aharon Dovid Goldberg: I want to point out something important, namely that young bachurim shouldn’t learn mussar on their own. Rather the rabbeim should teach them how to learn mussar. That’s not easy — but it must be done, and it will come at a later age.

Question: There are prominent bnei Torah who when offered a “shtele” in teaching Torah refuse, preferring to stay in the kollel. Is there a stage or a situation when they shouldn’t refuse such an offer?

HaRav Dovid Schustal: As long as he’s shteiging energetically and he feels satisfaction from his learning, he should continue to do so. But if he’s at a point where he feels stagnant in his Torah development then he shouldn’t refuse the offer.

HaRav Aharon Dovid Goldberg: Even if a person is still growing and shteiging, if his family is lacking and taking this position will ease it for them, then he must accept it. It’s very important not to forsake one’s children because of shteiging! One’s children are the continuity of the Am Yisrael!! Rav Dessler, ztz”l explains the mistake the Shevatim of Gad and Reuven made by wanting to settle on the other side of the Yarden. They had their reasons, and it was all l’shem shomayim, but it was a mistake because living there took its toll on the chinuch of their children!

Question: Please share some words of chizuk for who toil in Torah!

HaRav Aharon Dovid Goldberg: Since the Siyum HaShas two years ago, we hear that HaKadosh Baruch Hu is talking to us. I do not know what He’s saying, but He’s talking to us! He wants us to get closer to him!

The way for us to get closer is that when we’re learning we must remind ourselves that we’re learning His Torah, the dvar Hashem! After all, it’s possible to study Torah and not know, chas v’shalom, that it’s the Toras Hashem. It’s incumbent on us to really feel it, to walk around with a perpetual sense of joy that we’re privileged to daven to Hashem Yisborach, and to study His Torah, so that we are zocheh to get closer to Him and hear what He’s saying to us.

I recently asked a Yungerman, “Avreich, where do you live?” He replied, “I live in Dirshu.” What did he mean to say — that he didn’t live in Boro Park? His intention was to say that the spirit of the Beis Medrash follows him wherever he is!

Rabbi Aharon Kotler, ztk”l, was a rare combination of two worlds. On the one hand, he was a Torah purest who was uncompromising in approach and who spread his enthusiasm for Torah to his talmidim. On the other hand, he gave of himself for the needs of Klal Yisrael all over the world. Is it possible to raise a generation that combines the two together?

HaRav Dovid Schustal: These aren’t two separate paths. Let me tell you a secret — these are both rooted in the same place that sprouted two different trees. When Maran Rav Aharon, ztk”l, eulogized Rav Issur Zalman Meltzer, ztk”l, he stressed that he had been spreading Torah for fifty years — but it all stemmed from the responsibility he felt for Am Yisrael. And the proof was that he set aside working on his own sefer to edit the Rambam for the sake of the public.

We can say the same about Rav Aharon, ztk”l. His spreading Torah stemmed entirely from the same sense of responsibility for Klal Yisrael. They aren’t separate areas at all.

One year, on the yahrzeit on Kislev 2, my father-in-law, Rav Shneur, ztk”l, stated something amazing — the more Rav Aharon invested in the Klal the more he advanced in his Torah!

One Rebbetzin who attended the convention had a complaint: “Why couldn’t the women hear the drashos and shiurim that were given to the men? Why should we lose out?”

HaRav Goldberg, shlita, agreed with the complaint: “It’s true that there were special programs to inspire and give chizuk to women, but there’s no comparison when a woman hears the same words her husband hears — then she’s literally in the same boat! They, too, should be able to draw immense inspiration from the wonderful words their husbands were hearing over Shabbos.

“Who is greater than Maran Rav Akiva Eiger, who testified on himself that in the evenings he would talk to his wife about inyanei yiras Shamayim. Rav Akiva Eiger! They were so connected that when his wife passed away he was never the same. Therefore, I suggest that each one establish a chavrusah with his wife to study together. Learn something interesting with her such as Nach, divrei mussar, and the like. Bring her into your spiritual world! It’s not possible for both spouses to live in separate worlds.” 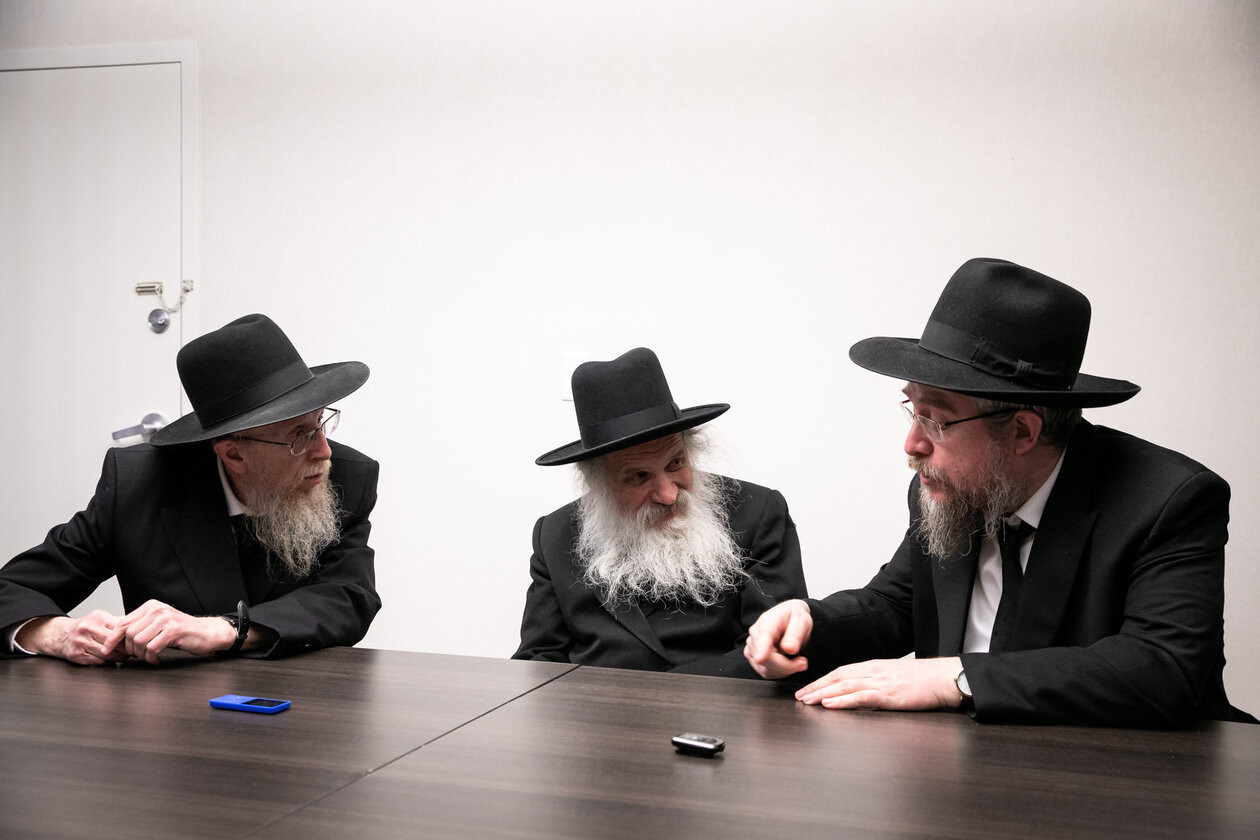 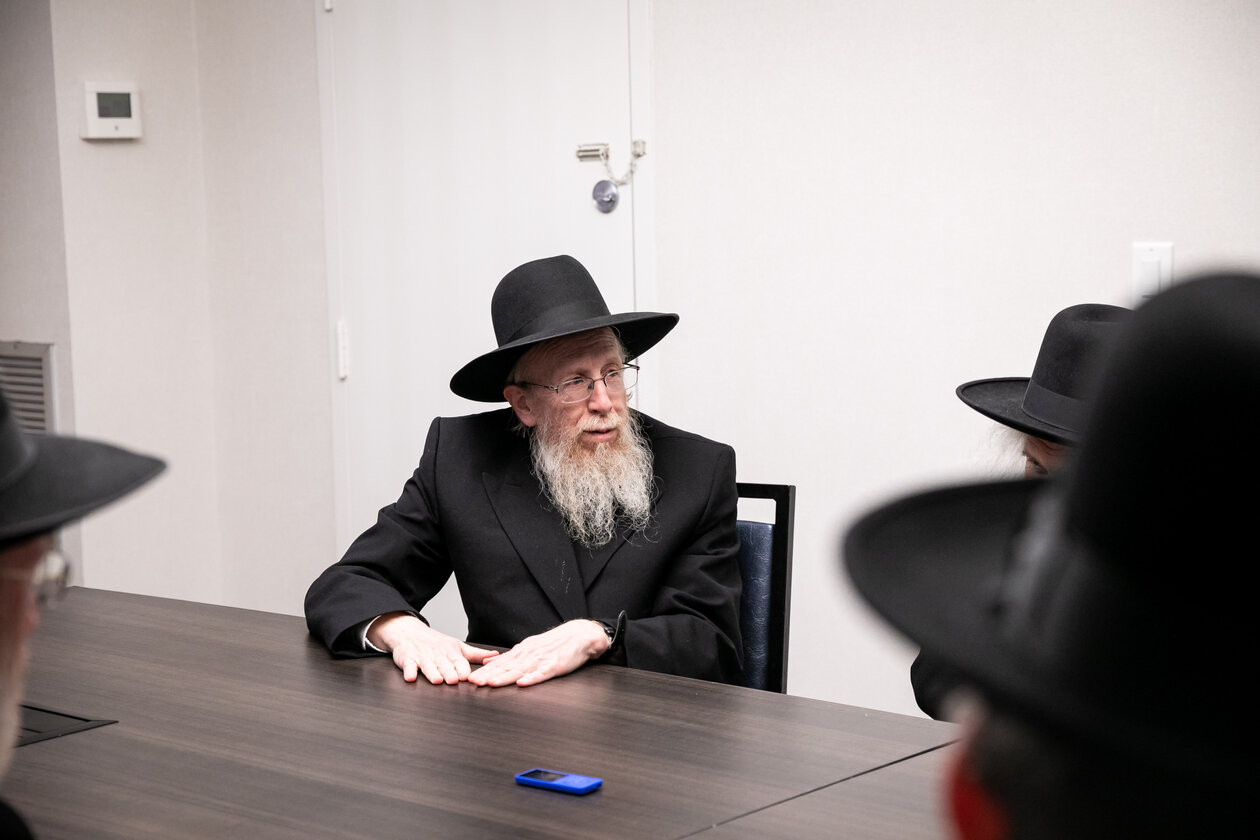 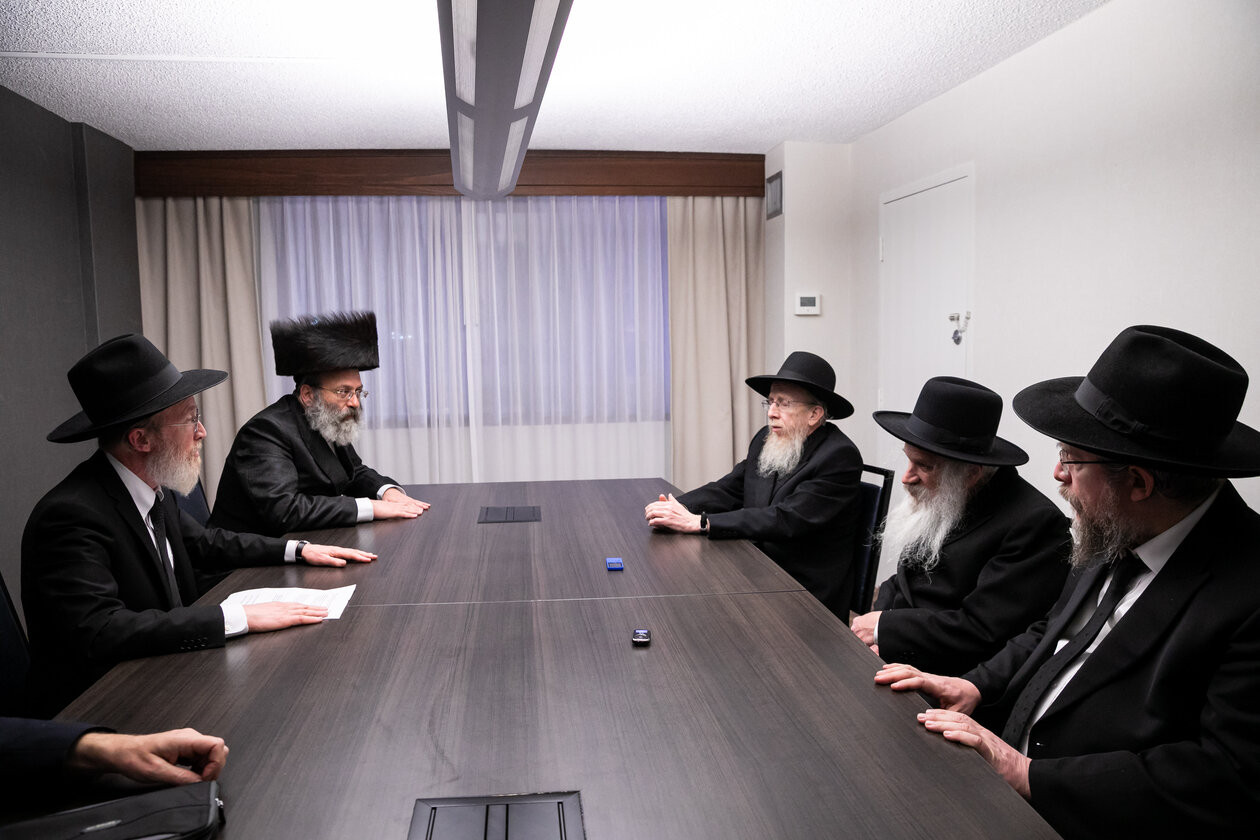