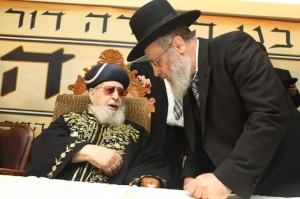 Addressing a yahrzeit seuda in Rishon L’Tzion, Sephardi Chief Rabbi Yitzchak Yosef told participants of how he used to accompany his father, Maran HaGaon HaRav Ovadia Yosef ZT”L in his travels, taking advantage of the time to learn with him.

The Rishon L’Tzion shared a story about a flight they were on that ran into serious problems. He explains the plane was compelled to make an emergency landing and passengers panicked, with many screaming and crying. Rav Yosef tells the story that his father continued his limud Torah as if nothing was occurring around him. Maran continued his limud and tefilos that nothing bad should occur. After a few minutes the pilot found a landing place and he succeeded in making the emergency landing without incident. “When we got off the crew members, who were non Jews, saluted Abba and credited him with the plane landing safely and thanked him for the miracle” Rav Yitzchak explained.

The chief rabbi was addressing a seuda on the yahrzeit of the Baba Sali ZT”L ZY”A and Rav Yitzchak Kaduri ZT”L ZY”A sponsored by Mosdos Ateret Chachamim headed by HaGaon HaRav Chaim Rabi.