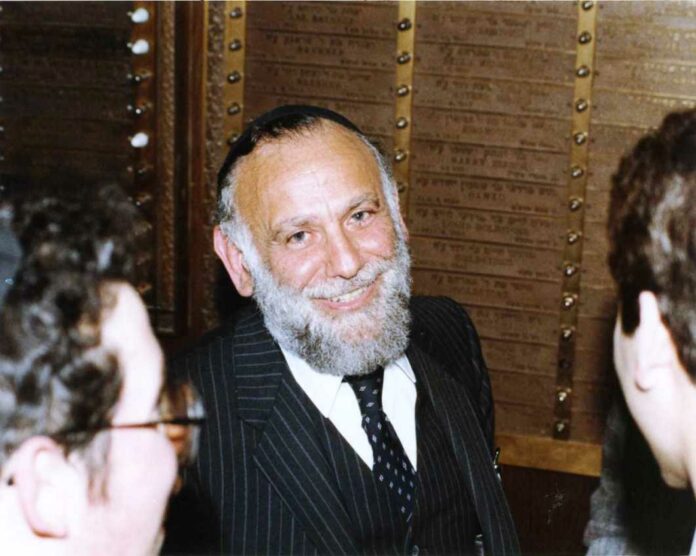 There was no one who knew him that was unaffected by him.  His love for his Talmidim, for his congregants, for Klal Yisroel was seen in his warm, loving smile and in the hand that extended over your shoulder as he spoke to you.  His intellect and his grasp of the entire oeuvre of the Mussar literature were both quite formidable.  Rav Moshe Chait zatzal (Yahrtzeit 8 Av) was unique in that he combined all of these qualities in one, as he served as the Rosh HaYeshiva of Chofetz Chaim’s branch in Sanhedria HaMurchevet in Yerushalayim.

He was a master pedagogue whose power of description was nothing short of a time machine.  As one sat and listened to his shmuessim, you were transported.  I remember his vivid description of Shavuos in South Ninth Street in his beloved Yeshiva in the 1930’s.

We were all transfixed and literally transported.  His description of it all, especially the feelings of ruchniyus that permeated what he felt, made it so real and palpable even for the listener.  You felt that you were there.  You were a Talmid of Reb Dovid zatzal too.  You felt the connection.  True it was not possible, but somehow, some way, you too were a Talmid of Reb Dovid.

His shmuessim were so uplifting and inspiring that Talmidim who had him more than two or three decades earlier were and still are listening to tapes and mp3s of them.   He discussed the mundane and transformed it into a religious experience.  I remember once, some of the bochurim (myself included) were not making their beds.

Hakaras HaTov to one and to all.  Hakaras HaTov even to an inanimate object.  This bed refreshed you.  It revived your spirit.  You, a tzelem Elokim, a reflection of the Divine Spirit.  Reflect upon what that bed is, and allow it to once again be in its most dignified state.  Make that bed.  Your coat kept you warm.  Treat it properly.  Hang it up.

We rushed to turn the mundane into kedusha.  We ran and made our beds.

A question.  Rebbe, could this also be why Chazal made brachos?  To sanctify the mundane?  Rav Chait’s loving hand and warm smile gave you the answer.  And he felt pride in your question – like a loving father.  Vast erudition and love.  He conquered hearts.

His passion was Mussar.  And he loved his beloved Midrash, the Yalkut Shimoni.  Trained by the scions of the Mussar Movement, he had the ability to unfold the latent Mussar gem that lay inherent, hidden perhaps, but revealed so beautifully and eloquently, within the words of the Midrash and Rav Chait’s expanation.   Indeed, he had studied this text for over four decades – even back then.  He knew it through and through and was attuned to the subtle differences between it and other versions of the same Midrash.

He kept in touch with Talmidim and wrote them letters.  Which Rosh Yeshiva writes letters to Talmidim past?  Sadly, it is unheard of.

There was no question.  He was that link to Torah past.  But he connected you to it.  You were that next link in the chain.  He linked you to his Rebbe, Reb Dovid Leibowitz.  He linked you to Reb Dovid Leibowitz’s Rebbe, the Alter of Slabodka.  His formidable powers of description once again had that time-machine quality, and there you were – in the Slabodka Yeshiva itself hearing Shmuessim from the Alter.  Don’t ask how it could be – it was.

And then Rav Chait zatzal transported you somehow to Rav Yitzele Peterberger, and to Rav Yisroel Salanter himself.  Regal, tall and angelic Rav Salanter.

And that is how we all saw him too, regal, tall, and angelic.

Rav Moshe Chait told us of Rav Salanter’s reaction to the Cholera epidemic in the 1800’s in the Great Synagogue of Vilna.  Somehow, some way, he had had what seemed was a firsthand account.

His Hakaras HaTov toward others was a Mussar lesson in and of itself.  I was zocheh to be a shliach in a large donation to the Yeshiva so that the Yeshiva could have a copy machine. Back then, large copy machines were upwards of seven thousand dollars – a huge sum in the early eighties. And years later, Rav Chait zt”l still warmly expressed his Hakaras HaTov.  He was real and genuine.  He put into practice everything that he spoke about.  Even years later, one swells in appreciation of having known someone so genuine in a world of sheker.

Rav Chait personified humility in its very essence. His Yeshiva was one of remarkable growth for its students and was most assuredly not a cult of personality.  And yet he also had a remarkable strength of character.

I was not zocheh to have heard his shiurim in Gemorah.  I was too young.  But his powers of analysis were remarkable there too.  He was equally comfortable in the Mussar texts as he was with a Gemorah and a Tosfos in front of him.

In Yeshiva, there were stories that spread around about his years in Rabbanus, as the Rav of the Young Israel of Bayswater in Far Rockaway.  Once a wealthy member of the community was behaving in a truly horrifying manner.  Rav Chait and the shul president approached him.  His reaction to the shul president was violent.  Now at this point in the narrative there are different versions.  But suffice it to say that Rav Chait stood him down and the man begged for Rav Chait’s forgiveness.

Chazal tell us that a nitzutz of the Neshama of the father is present in each one of his children.  And one can see it in every one of his sons – Rav Dovid Chait, the current Rosh HaYeshiva of Chofetz Chaim in Yerushalayim – warm, wise, and loving;  Rav Boruch Chait, creative and brilliant, the founder of Maarava, the founder of modern Torah music (the Rabbi’s Sons), author of those remarkable illustrated halacha and mussar books; and Rabbi Reuvain Chait – fearless, brave and inspiring – yet loving and caring.  Each of his children carry part of his Neshama.  They are him.  His daughters, I am told, have equal qualities.

Rav Moshe Chait personified what the ideal Rosh HaYeshiva could and should be – passion in every shiur and shmuess; visible, palpable love for Talmidim, Torah, and Klal Yisroel; and an ability to speak, inspire, and transform.

It is most fitting that he passed into the Olam HaEmes right before Tisha BeAv.  It should not just be the family, and his Talmidim that mourns this remarkable shalaim. All of Klal Yisroel is now mourning.  The loss is indescribable.

The author publishes a weekly Parsha sheet on the topic of Emes for the Sfas Tamim Foundation.  To subscribe please send an email to the author with the word subscribe included to [email protected]