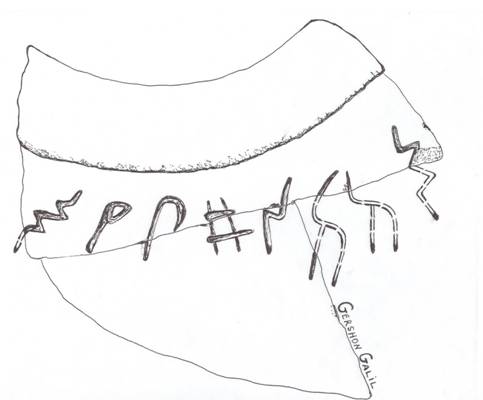 Professor Gershon Galil, from the Department of Biblical Studies and Jewish History, University of Haifa, in Israel, who has deciphered the inscription, pointed out that it indicates writing abilities as well as the existence of an administration which collects taxes, prepare storage places and jars, and takes care of the workers in Jerusalem, as early as the second half of the 10th century BCE, probably in the reign of King Solomon.

Professor Gershon Galil, from the Department of Biblical Studies and Jewish History at the University of Haifa, deciphered the oldest Hebrew inscription found in Jerusalem. The inscription was unearthed during the 2012 excavations in Jerusalem, ca. 80m south of the southern wall of Har Habayis, by Dr. Eilat Mazar and her team, during an archaeological excavation on behalf of the Institute of Archaeology of the Hebrew University in Jerusalem.

The new inscription was incised under the rim of a large pithos and reads, from right to left, as follows: “[…]m [yy]n ḫlq m[…]”, namely: “[in the … year], wine of inferior quality, (send) from GN” (see Figure below). The inscription is divided into three categories: (a) a date formula; (b) classification of the wine; and (c) provenance.

Prof. Galil said that the form yyn (“wine”) indicates that the language used in this inscription is Hebrew, written in the southern dialect: in Ugaritic, Old Canaanite, Phoenician, Ammonite, and even in Israelite Hebrew (attested in the Samaria Ostraca) wine was always written with only one yod; But in (southern) Hebrew the form is always yyn (Epigraphic Hebrew [Lachish, Arad and more], Biblical Hebrew [without any exception], Ben Sira, Qumran, and even in the Rabbinic sources). Prof. Galil published his findings in the Strata Bulletin of the Anglo-Israel Archaeological Society.

“The new inscription is written in the late Cannanite script, in (southern) Hebrew, and should be dated to the second half of the 10th century BCE. It is therefore the oldest Hebrew inscription ever found in Jerusalem, and it is about two hundred and fifty years older than other inscriptions known from Jerusalem. In those days King Solomon completed his monumental building projects in Jerusalem, including the Temple and the palace. Solomon was the king who inhabited the Ophel and he was the one who built the wall of Jerusalem which united its three main quarters: the Temple Mount, the Ophel and the city of David”, said Prof. Galil.

Prof. Galil also said that the new inscription indicates that large quantities of inferior wine were used in Jerusalem: “This cheap wine was not served on Solomon’s table, nor used in the Temple. So it is reasonable to suppose that it was served to the hard workers that were engaged in the large scale building projects in Jerusalem, and maybe also to the soldiers who served there. The logistics needed were probably concentrated in the Ophel. Inferior wine was also served to the Cypriot mercenaries in Arad, and in later periods to workers and soldiers in the Hellenistic and Roman periods”.

The inscription also teaches us that there were scribes in Jerusalem who were able to write texts as early as the second half of the 10th century BCE. The registration of the wine and its storage indicate the existence of an administration which collected taxes, prepared storage places and jars, and took care of the workers in Jerusalem, fed them and served them water and even inferior wine.

“Scribes that were able to write administrative texts are also able to compose literary and historiographical texts (as clearly demonstrated recently by the Qeiyafa inscription). This fact is of major importance for reconstructing the process of the crystallization of the Bible, and even more for the understanding of the History of Israel and Jerusalem in Biblical times”, summarized Prof. Galil.