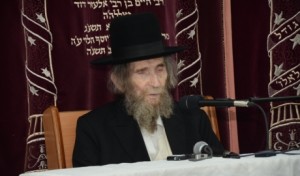 Despite his own weakened state after collapsing at home earlier in the day and being transported to the hospital, HaGaon HaRav Aaron Yehuda Leib Shteinman Shlita was informed of the time of the levaya of the children of Rav Shimon Gross. During the entire levaya the gadol hador was visibly pained as he recited tefilos for refuah shleima for the sons of Rav Gross, who are fighting for their lives in Schneider Children’s Hospital in Petach Tikvah.

The rav called it “a difficult tragedy” adding “each Ben Torah is responsible to accept to be mechazeik in limud Torah and Yiras Shomayim towards a tikun”.

Due to the rav’s weakened condition he will remain home and he will not have kabolas khal.

The names of the Gross family sons for tefilos are;

They remain in very serious/unstable condition in an ICU.