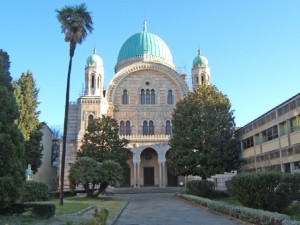 A number of Jewish institutions in Rome, Italy including the city’s Great Synagogue received a delivery of a pig’s head, leading to outrage among the members of the city’s Jewish community. The packages arrived on erev Shabbos Parshas Mishpatim 5774. The event appears to have been timed to coincide with the eve of International Holocaust Remembrance Day, which is observed on January 27th. Other recipients of the pig’s head include the city’s Jewish Museum which has a Holocaust display and the Israeli Embassy in Rome. Also included in some of the packages was a letter addressed to Binyamin Ze’ev Herzl praising the Holocaust. In at least one of the cases a phone call accompanied the delivery of the package, warning it contained a bomb. The bomb demolition technicians finally opened the package, only to discover the pig’s head.

Rome’s mayor decried the acts of hate and expressed shock and stated the responsible parties bring embarrassment to all residents of the city. The mayor spoke with the city’s Jewish leaders and decried the acts against the Jewish community. Police are investigating.