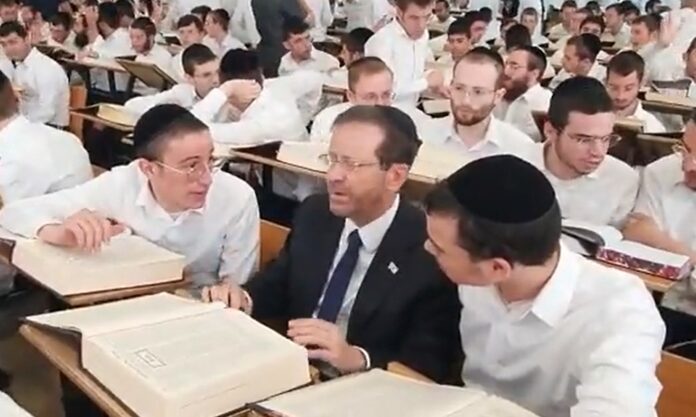 President Yitzchak Herzog visited the mosdos chinuch in the city of Elad on Wednesday in honor of the beginning of the Elul zeman and the start of the school year.

While visiting Yeshivas Torah B’Tifarta, a large yeshivah with over 1,000 bochurim, Herzog sat on the bench with the bochurim and joined in the pilpul on Masechtas Bava Metziah, learning b’iyun for an hour’s time.

He then met with the Roshei Yeshivah and held a long and personal discussion with them on the value of limmud Torah.

Herzog also visited Talmud Torah Daas Yosef, where he was greeted by the 3rd and 4th graders singing אם בני אדם היו מרגישים את מתיקות וערבות התורה. Afterward, he held a discussion with the eighth graders, one of whom is Nehorai Gal, the son of Reb Boaz Gal, hy’d, who was murdered in the Elad terror attack. At the end of the discussion, Herzog gifted Nehorai with a Sefer Tehillim in honor of his bar mitzvah.