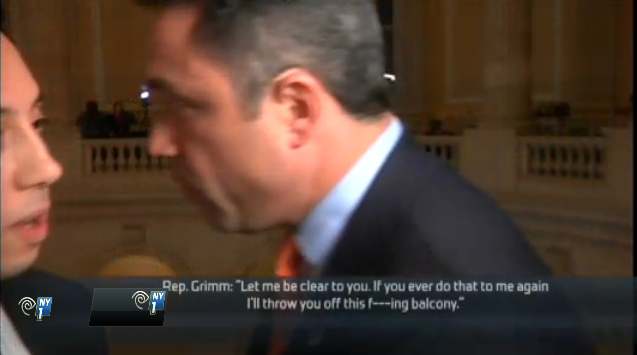 Staten Island Congressman Michael Grimm has apologized to NY1 political reporter Michael Scotto a day after physically threatening him at the end of an interview in the Capitol Rotunda following the president’s State of the Union address.

Scotto tells NY1 he accepted the apology and believes that it was sincere. “I accepted his apology and I think we’re going to move on from here,” said Scotto.

“I was wrong. I shouldn’t have allowed my emotions to get the better of me and lose my cool. I have apologized to Michael Scotto, which he graciously accepted, and will be scheduling a lunch soon,” the statement read. “In the weeks and months ahead I’ll be working hard for my constituents on issues like flood insurance that is so desperately needed in my district post Sandy.”

“I’m a human being and sometimes emotions get the better of you and the bottom line is it shouldn’t have happened,” Rep. Grimm told reporters on Capitol Hill Wednesday. “You lose your cool and that’s why I apologized. When you are wrong you are wrong and you have to admit it and it shouldn’t happen.”

“Bottom line is I lost my cool and I apologized,” he said. “My constituents know I’m extremely passionate about them. They expect Michael Grimm to have their back and that’s what I’m known for and I’m very passionate about it. And unfortunately when you are that kind of person that has a lot of passion your emotions can get the better of you. There’s no excuse. Mike was gracious and gracious enough to accept my apology and put it past us.”

“There has to be neutral respect even when your questions are tough–your job is to ask tough questions. But to physically threaten someone? That’s something no public servant should do. And I think he owes Mr. Scotto an apology,” he added.