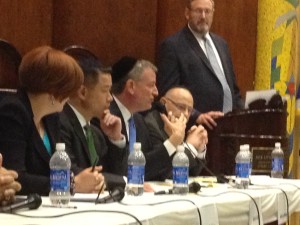 In an open letter to the mayor, published in The Jewish Week on Wednesday, the group took exception to de Blasio’s remarks at the Jan. 24 Manhattan gala, which were meant to be off the record, before it leaked by ambitious Capital New York reporter Azi Paybarah.

“We would not presume to define your job for you,” the letter signed by group artists, professors, rabbis and communal leaders aligned with the group, reads. “But we do know that the needs and concerns of many of your constituents — U.S. Jews like us among them — are not aligned with those of AIPAC, and that no, your job is not to do AIPAC’s bidding when they call you to do so.

“AIPAC speaks for Israel’s hard-line government and its right-wing supporters, and for them alone; it does not speak for us.”

In a response emailed to The Jewish Week, the mayor’s press office said, “Mayor de Blasio is committed to preserving and strengthening New York City’s relationship with Israel because of our shared values and the threat of terrorism that we both face. His commitment to this goal transcends any particular organization and is rooted in the people of New York City and their values.”