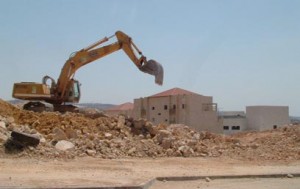 The Israel Land’s Administration has recently publicized a building tender for 294 new apartments in the “Country” area of Jerusalem’s Ramot neighborhood. Rabbi Asher Kuperstock, who heads the Lev Ramot local council, praised the announced tender, which represents a step towards addressing the critical housing shortage for bnei torah families in the capital.

It appears the nonprofit representing bnei torah families will be first in line to purchase apartments. The plan calls for the construction of apartment buildings that will be up to seven stories tall. These apartments will be built to a high standard.

In addition, those purchasing the units will be told that in line with the building, which is designed to easily accommodate expansion, the owners will have rights on building rooftops and streets that will permit expanding in line with zoning regulations. The chiddush is that one will not have to obtain the consent of other residents of the building to expand, for all buyers will have to agree to this in advance, a pre-purchase stipulation. This will sharply curtail the expense involved in expansion, not to mention the bureaucratic hurdles. Askanim involved are pleased with this new stipulation which will avoid machlokes between neighbors in the future.