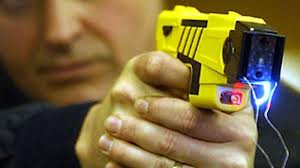 Despite harsh criticism against Israel Police for taser abuse, as in the case of the arrest of Boaz Albert, in addition to the indictment of one policeman for such abuse, Israel Police has relaxed guidelines for the use of a taser gun. Civil rights activists are stunned (pun intended) by the policy change relaxing use of the non-lethal weapon amid so many complaints involving alleged taser abuse.

While in the past a policeman was permitted to use a taser for a maximum of 10 seconds, two 5 second bursts, the new guidelines permits a maximum of three shots [three five second bursts of electricity]. While the old guidelines prohibited the use of a taser to control disturbances, this is no longer so. The laser may be used to contain a disturbance. It may even be used to prevent property damage even if there is no danger of injury to any person.

A taser may not be used against ‘sensitive population groups’ including pregnant women, cardiac patients and the like.