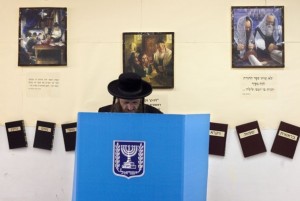 Chareidi lawmakers were angered by the Knesset Interior Committee, which MK Rav Yaakov Asher labeled “a defamatory mechanism against the chareidim”.

On Monday 24 Adar I Chairwoman MK Miri Regev convened a special session of the committee to address the upcoming elections in Beit Shemesh.

Chareidi MKs Asher (Yahadut Hatorah) and Yitzchak Cohen (Shas) turned to Knesset legal advisor Eyal Yinon, explaining on that day, the Supreme Court ruled on a second election in both Beit Shemesh and Nazareth but the committee is only addressing Beit Shemesh.

Asher stated in his letter to attorney Yinon “It is unacceptable that time after time the committee is a defamatory vehicle against the chareidi tzibur. It would be better if the Likud candidate ran his campaign in the accepted fashion, and I expect that you, as the person responsible for the committee, to make sure this is the case, at least towards making an acceptable outer impression to display an air of honesty and transparency”.

In the response sent to MKs Cohen and Asher they are assured the committee will deal with the elections in both Beit Shemesh and Nazareth equally.

Asher lashed out at Regev during Monday’s session, shouting “the elections will be determined at the polls and not by you”.