The historic meeting of the Gedolei Hador Shlita, the Moetzas Gedolei Yisrael of Degel Hatorah, Shas and Agudas Yisrael met in Bnei Brak on Monday night, the eve of 25 Adar I 5774. There was much speculation if HaGaon HaRav Shmuel Auerbach Shlita would attend. He was present with the other gedolim.

The rabbonim decided that if the new draft bill is passed into law in its current format, they will convene again at which time they will possibly decide on prohibiting reporting to an IDF induction center. The used the meeting to release a letter explaining the position of the joint Torah Councils, which is representative of all chareidi Jewry in Eretz Yisrael in the hope of the decision-makers getting the message.

HaGaon HaRav Shalom Cohen Shlita of Shas’ Council was visibly emotional as was reflected in his tone, lamenting the reality facing the lomdei Torah in Eretz Yisrael today, an effort to compel the chareidi tzibur to leave the beis medrash and abandon a lifestyle of an undiluted commitment to limud and the fulfillment of Torah. Rav Cohen, Rosh Yeshivat Porat Yosef began crying as he told his Ashkenazi colleagues that he is particularly fearful for the Sephardi talmidim, who are likely to be more affected by the law than the Ashkenazi litvish and chassidish camps.

The overall position was an firm and tenacious, not apologetic in any way as the rabbonim agreed that there would be no compromise towards abandoning the chareidi way of life.

· The rabbonim are calling on the government to immediately invalidate the decisions made by the Shaked Committee regarding the draft of bnei yeshivos.

· The rabbonim call on bnei yeshivos and kollelim not to enter the IDF under any circumstances and not to be enticed by offers of special accommodations or intimidated by threats of punishment.

· In the event the law is passed, the rabbonim are likely to instruct bnei Torah not to report to any induction center, not even for the preliminary first draft notice as they have done to date but to end any and all cooperation with military authorities.

· The rabbonim call on authorities not to rein back the Torah world but to assist religious institutions in the Holy Land to continue flourishing and to continue in the path of our rabbonim.

It was also decided that the large atzeres tefilla, which is being billed the “Million Man Atzeres”, will be held on Sunday, 7 Adar II 5774. Additional details to be announced.

Unfortunately, it would appear that the persons responsible for getting the word out to the media regarding the historic meeting did not succeed, for media coverage of the historic event, a major national news item, received minimal coverage on Channel 10 News and no more. This was to have been a major media event to send a loud and strong message and plea to the government. Perhaps those responsible will do their due diligence and make amends towards obtaining widespread coverage in the daily newspapers. 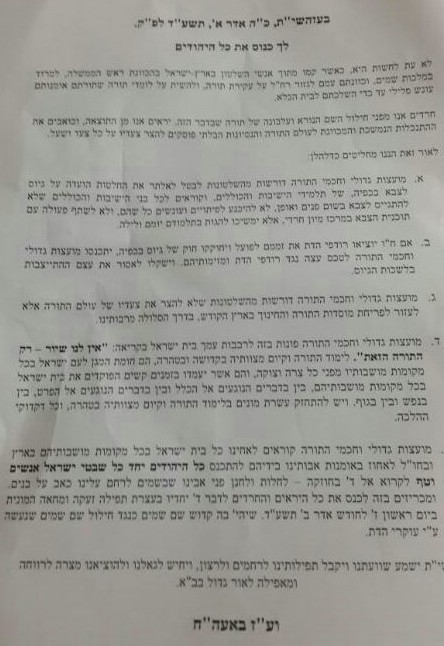