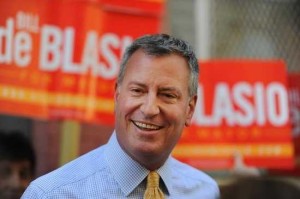 The following is a transcript from a press conference in Staten Island, held on Monday afternoon:

Question: From a national perspective, you seem to be getting hammered in the press. Everything from perceived favoritism, to how you’re driving, to handling the snowstorms and schools closings. Do you think that some of the criticism is fair, or is the criticism unjustified?

Mayor: I think it comes with the territory. I think the school closings is a great example. A mayor has to make that decision. I think it’s an objective statement: if you close schools, a certain number of people will be unhappy, if you keep schools open, a certain number of people will be unhappy. You have to make the decision you think is right, in terms of the needs of our kids, the safety of our kids, the needs of our families, their education, you know, which has to be another paramount concern. So, this is part of decision-making in a high-scrutiny environment. And it comes with the territory.

Question: Do you feel you’re being treated unfairly?

Mayor: I think the notion that there’s going to be scrutiny again is baked into this whole reality, and you know, if you don’t like the heat get out of the kitchen, as Harry Truman used to say, and I chose to take the heat. I think there has to be a different examination of what matters and what doesn’t matter in the scheme of things. Today, we’re talking about preparing our city against further natural disasters. We’re talking about trying to help thousands of thousands of people back on their feet. On Friday, we’re talking about saving community health care, and hopefully resetting a dynamic where we’ve lost over a dozen hospitals in the last 12 years. These are issues that fundamentally affect people’s lives, and I think that’s where the public debate should reside. And I think too much of the time, the debate veers away into sideshows, but I’m not shocked by that. Grace.

Question: You were talking about focusing on issues that matter. One of the issues that you talked about in your administration is street safety, traffic safety, and unveiling your Vision Zero plan, you said that your administration would be held to the same standards. For many New Yorkers who saw the video footage of your chauffeured vehicles speeding and blowing through stop signs, they said, you know this doesn’t look like an administration that’s following its own policies, or even following through on promises that the mayor made two days earlier –

Mayor: Let me just respectfully say, I’m not interested in the construct of what you, as an individual think many New Yorkers think. I say that with absolute respect. I talk to New Yorkers all the time, my colleagues talk to New Yorkers all the time. Let’s not get into this concept of any of us will speak for all the people. I owe the people a vision, which I had put forward last year, and I’m acting on this year. They have every right to demand of all of us that we follow through on that which we said we would do, and we intend to do that. Every city employee needs to respect the law, myself included, needs to respect the traffic laws, needs to comport themselves in a way that’s safe, of course. No one’s above the law. That’s a fundamental view I hold in everything I think about public life in a democratic society. I think that’s a very different question, however, from the question of security for someone protected by the NYPD. And I think those two things should be separated, and my view was, that hasn’t happened enough in the last few days. Of course we want consistency in terms of safety. I wouldn’t have put forward Vision Zero if I wasn’t fundamentally serious. It could have been really easy to put forward something less. I believe in it. There’s a reason why it’s such an extensive program. We aim to change this city fundamentally. But at the same time, there needs to be a respect for the fact that the NYPD provides security, and they do it in a very professional manner, and I will not get into a discussion of their security protocols. That’s just a red line from my point of view, because that, to me, is a very slippery slope. I wish we were living in an environment where I didn’t need security. I really do. But that’s not the world we live in. In the back, yes?

Question: Mr. Mayor within the security context like for instance Danny Day Kim drove really fast. He went through lights using sirens going to and from an event. Mayor Bloomberg made it clear that he wanted to stop at traffic lights on a regular basis. And you know just have a different approach. Don’t you have some discretion when it comes to that?

Mayor: I would say, yeah please.

Question: You said [inaudible] that you would hold yourself to the same standard.

Mayor: Again let me separate the two thoughts. I think you ask an important question the front end but then I want to clarify the reality security. And again people can hear this and not hear it. But I will keep saying that there are two different issues of play here. One is the very legitimate concern in a democratic society that we all live up to our commitments and we all live up to the law. And none of us are above the law that is absolutely correct. And I would say my message to my detail and all city employees is obey the law, drive in a way that is safe and be careful threes no question about it. The second issue is how we think about security protocols. I don’t tell the NYPD how to do their work when it comes to protecting me, they’re the experts I respect that. So in any given moment they may see something I do not see. They may act in a way that isn’t immediately understandable to be but they are trained to handle things in a certain way. So I just want us to understand that there are two separate questions. Should everyone who works for me and should I follow the law scrupulously? Of course, yes. If the NYPD in any given instance believes there is a security for doing something a certain way I think that’s important to recognize and respect.

Mayor: I don’t comment on security protocols or what individuals who provide security think. I don’t k now you can feel free to ask them. But I think that the point is and I am not speaking about that specific moment I am speaking about the bigger reality that I understand and appreciate. And I have seen it happen many times and by the way I long experience dealing with the Intelligence Division before I was Mayor and I have long experience in the very different vain dealing with the secret service. I respect that they see things we may not see it. They make decisions and I respect those decision. My general message to everyone who works for me is obey the law, be careful when driving, and that we are going to take this Vision Zero concept and apply it very effectively and consistently over the coming years. And we think it is going to make people safer in this town. Thanks very much.