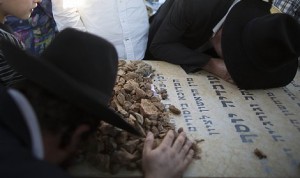 Heading the tefilos will be HaGaon HaRav Reuven Elbaz Shlita, and organizers announce many other prominent rabbonim will be present due to the harsh gezeiros being faced by lomdei Torah in Eretz Yisrael today.

A large number of participants are expected due to the atmosphere just days ahead of the Million Man Atzeres, scheduled for Sunday, Rosh Chodesh Adar II.