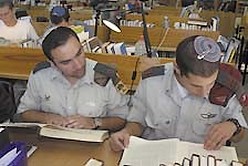 Sderot Hesder Yeshiva rebbe, Rabbi Dror Aryeh spoke with Kol Berama Chareidi Radio on Wednesday, 26 Adar I 5774. Rabbi Aryeh did not mince words, expressing absolute and total opposition to the draft law. “We are all in the same pot” he exclaimed regarding efforts to curtail limud Torah in Eretz Yisrael. “Without limud Torah there will be no nation, no state and no Land of Israel for Torah is our survival”, he added. This is an affront to all of us, not just chareidim.

Rav Aryeh stated that this is the belief of most prominent dati leumi rabbonim, and for certain the tzibur’s gedolim, and these rabbonim have state so in talks with their talmidim. When asked to identify the gedolim who are opposed he explained he did not ask permission to quote them by name and therefore, being a simple Jew, he could not dare to do so without their permission.

In Rabbi Aryeh’s eyes it does not matter if chareidim will be arrested or not, and it does not matter if they go to the IDF or not, but what matters is that the nation has been attacked and everyone should be outraged by a bill that seeks to label lomdei Torah ‘criminals’, nothing short of outrageous. He explains the very notion of using such a term about those studying Torah and keeping the state alive is simply repulsive. He adds that prominent dati leumi rabbonim including Rabbi David Chai HaKohen has called on his talmidim to attend the atzeres, as is the case with the Sderot Hesder Yeshiva and many others. They understand the need to shout out against the Chilul Hashem too he explained.

He stressed this has nothing to do about hashkafa or politics, but it has to do with Kovod Hatorah.