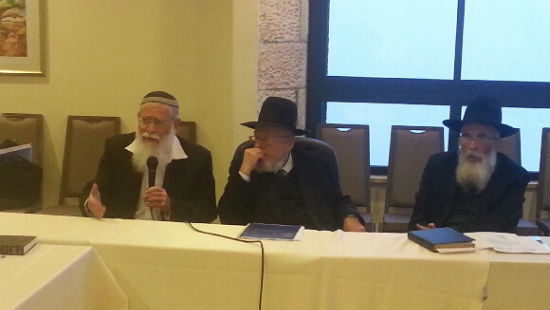 Shomron Chief Rabbi HaGaon HaRav Elyakim Levanon Shlita attacked the government, stating “it does not have a right to exist. The rav made his remarks during a kenos of senior dati leumi community rabbonim on Thursday, 11 Adar II in Bayit Vegan Yerushalayim. The rabbonim discussed matters of religion and the State of Israel.

The kenos was opened by HaGaon HaRav Dov Lior Shlita, who called on MKs not to cooperate and to fight against the newly amended bills. He added “We are witness to rocket attacks that include laws that are more inclined to impair the status of the Rabbanut and the religious character of the state”.

Rosh Yeshivat Har HaMor HaGaon HaRav Mordechai Sternberg Shlita spoke harshly against the legislation in Knesset. “There is a Torah in Israel and there is a Rabbanut. There cannot be any other religious legislation under any circumstances. The Ministry of Religious Services is subordinate to the Chief Rabbinate of Israel and not the other way around. One does not consult with rabbis but one asks [what to do].”

Rav Levanon decided to address the giyur bill. “The party capable of passing the giyur bull into law has no right to exist and the Bayit Yehudi Party must leave the coalition. I the interim, we must awaken and fight to apply the brakes to stop these civil laws and to push the Knesset to sop the processes. I call to stop these draconian civil laws.”

Some of the other rabbonim present were Rabbi Moshe Gantz, Rabbi Chaim Gantz, and Rabbi Baruch Efrati.

Rabbi Efrati added “The laws are a symptom and the root of the problem is religious identity. There are those who do not view the Torah as the source for our entire lives and culture. Therefore, the same problematic laws are consistent with their worldview”.