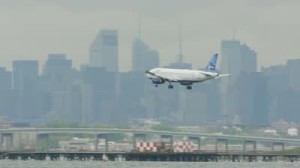 Authorities say a plane with two people aboard has made an emergency landing at New York’s LaGuardia Airport after the pilot noticed a crack in the windshield.

The aircraft operated by Delta Connection carrier GoJet was flying from St. Louis to LaGuardia on Saturday morning.

Port Authority of New York and New Jersey spokesman Ron Marsico says the pilot and co-pilot were ferrying the plane to New York for a later flight.

Delta says the pilot noticed a thin windshield crack while en route and declared an emergency landing as a precaution.

The airline says the plane is being taken out of service for maintenance.