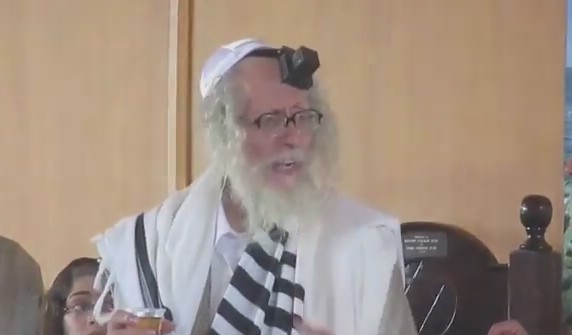 As YWN reported, Shuvu Banim leader Rabbi Eliezer Berland spent this Purim in Zimbabwe, where has been living for the past few months.

Rabbi Berland’s travels began when he fled Israel around 18 months ago to avoid arrest amid accusations of law-breaking. He first set up shop in Morocco, where he was for seven months until being instructed to leave. He then chose Zimbabwe as his new home, where has remained until now.

Prior to Purim, YWN had reported that Rabbi Berland instructed his talmidim to be mispallel for him as he plans on returning to Israel. As of this time, he remains in Zimbabwe.

The video below was taken in Zimbabwe on Purim, where 150 of his Chassidim joined him for purim.

Many of our readers may find this video fascinating for many reasons.

The following text appears below the video on YouTube, and was written by the individual who took the video and published it:

Apologies for the quality, my son is not a professional cameraman and this is the first time I used iMovie, but I just wanted to provide a taste of what it was like there.

As is well known in the Yeshiva already for many years, the camera works perfectly well, turning out movie after movie of the highest clarity…until you train it on the Rav, and then all of a sudden the picture goes blurry!

The weather forecast said thunderstorms throughout the week, but in the end it was beautiful and sunny the whole time, apart from one downpour on Purim afternoon, so of course, everyone was so completely drunk, they all simply had to run out and dance in the rain…après moi le déluge!

Purim was followed immediately by the Mor wedding, where they brought in some resident Bulawayo drummers to add a little local colour, (no pun intended), and taught them some Hebrew songs.

Many thanks to President Mugabe for providing the beautiful setting for the holiday.