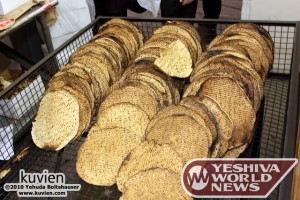 Why is this night different from all other nights?

That’s a good question. And the answer is given throughout the evening of Pesach-an answer that could perhaps be further illustrated through a story:

There are communities in this country that suffer from skyrocketing rates of assimilation. A question was once asked of a rabbi of a congregation in such a community. It was posed by a father whose son was on the brink of an intermarriage. “Rabbi, how does one make the Haggadah contemporary? How can we bring the meaning of Pesach, of Judaism, for that matter-to those who are perhaps somewhat uninterested?”

The rabbi answered, “I want to first point out to you a Rashi in the book of Genesis. The Rashi has a history. First, I’ll tell you the words of the Rashi, then its history…”

Rashi asks why the Torah had to start with Bereishis bara Elokim, with the account of the creation of the world. Why didn’t the Torah start with the first mitzvah-ha’chodesh hazeh lachem? Rashi answers that it did so to establish the legitimate claim of the Jewish people to the Land of Israel. For in the future, when the Jews will have Eretz Yisrael, the gentiles will accuse the Jewish people of stealing their land (Israel or “Palestine”); but the Jews can answer: “Hashem created the Heavens and earth-He can give it and take it away from anyone whom He sees fit…and He gave it to us.”

Now, look at the poor lowly state of the Jewish people. This Rashi was written shortly before the Crusades. Imagine the poor incredulous Jews reading this Rashi at that time. “‘Hashem gave Eretz Yisrael to us.’ To us? The Muslims and the Christians are fighting over it! They are all-powerful! We are political non-entities…”

Fast-forward now through Jewish history. It is now Poland in the 1600s. Bogdan Chmielnicki and his hordes are roaming the countryside murdering and pillaging-and specifically targeting Jews. Imagine a small cheder with young boys whispering through this Rashi. “‘Hashem gave Eretz Yisrael to us.’ It is ours? We are being persecuted! We are political non-entities… How dare we even dream of even laying claim to it?”

Fast-forward again. We are in Odessa, in the Ukraine, near the turn of the last century-site of a terrible pogrom. Again, imagine a small cheder with young boys whispering through this Rashi. “‘Hashem gave Eretz Yisrael to us.’ Us? We are being persecuted! We are political non-entities… How dare we even dream of even laying claim to it?”

Now a third time. We are in the Warsaw Ghetto now. It is close to April 20. The Nazis wish to deliver a Warsaw free of Jews to Hitler, y’mach sh’mo, as a birthday present. Once again, imagine a small cheder with young boys whispering through this Rashi. “‘Hashem gave Eretz Yisrael to us.’ We have it? The Nazis are murdering us systematically! We are political non-entities… How dare we even dream of even laying claim to it?”

Yet we, now, are experiencing the fact that this Rashi has remarkably come to life! Who would have imagined that the weak, tired, poor huddled masses of Israel would now have Eretz Yisrael and would have to respond to charges that we “stole the land”?

About a hundred years ago, archaeologists discovered a lost civilization called the Indus Valley civilization. Imagine finding these people and then witnessing their return to their land. It would be nothing short of miraculous-a miracle that actually happened to us, and one that no one would have ever believed or known could happen. Yet we Jews-believers in Hashem and that He has Divine Providence over us, his nation, and that He has singled us out for a special mission-knew it all the time.

The rabbi then invited the father and son to share the Shabbos meal with him. The story, unfortunately, does not continue. It ends there. We do not know what happens next to the father or the son. Let us imagine, however, what might have been said at that meal. Let us explore the inner meaning of Pesach and its contemporary relevance to us-all of us-now.

Pesach has been described by the great Sages of Israel as the “Rosh Hashanah of emunah”-the New Year for faith and belief in Hashem.

Chazal tell us that it was solely on account of our emunah in Hashem that we were redeemed from Egypt and that it will be solely on account of emunah in Hashem that we will be redeemed in Messianic times. It behooves us, then, to understand, appreciate, and further enhance the yom tov of Pesach as the fountain of emunah from which we draw for the entire year.

Since this is the essence of the yom tov of Pesach, the main mitzvos of the night of Pesach are sipur yetzias Mitzrayim-the telling over of the Exodus from Egypt and the mitzvah of “V’higadta l’vincha-And you shall relate it to your son.” Both of these mitzvos plant and entrench emunah, belief in Hashem, in ourselves and in others. Our Sages further tell us that the more we discuss the mitzvah, the more praiseworthy we are-kol ha’marbeh l’sapeir…harei zeh meshubach. Why is this so?

In regard to all other mitzvos, once the mitzvah has been fulfilled, that’s it-it ends. Here, however, the mitzvah continues. Reb Shalom Noach Berzovsky, zt’l, the Slonimer Rebbe, explains that the mitzvah is a continuous one precisely because it is the means of imbuing the heart of each and every Jew with emunah throughout the year. Indeed, no matter the stature of the person, the mitzvah never ends: Afilu kulanu chachamim, kulanu nevonim…the greatest of sages are also obligated in this ever-continuous mitzvah-because they too need the boost in emunah that is obtained from Pesach. There are infinite depths to emunah-thus the means of instilling this emunah is also infinite.

But what is emunah? What exactly must we as Jews believe? The Slominer Rebbe delineates three separate areas: (1) Belief in the Creator of the world, in which the righteous gentiles of the world also believe. (2) Belief in the Creator’s Divine providence-that the Creator takes the time and “effort” to involve Himself in the details of our lives here on earth and (3) The fact that we, the Nation of Israel, have been chosen for a unique and Divine role and mission.

All three aspects of emunah are part and parcel of the Exodus. The ten plagues demonstrate that there is hashgachah p’ratis-Divine providence. The Exodus itself and the subsequent revelation of the Torah to the Children of Israel indicate Israel’s unique role. Finally, the sheer miracles of the event point to the Creator.

The sheer miracle of our restoration to the land of Eretz Yisrael, and, for example, to the town of Lakish, where the seal of Gedaliah ben Achikam (of Tzom Gedaliah fame) was found, also attests to the existence of a Creator, to Divine Providence, and to His special role for us as the Am HaNivchar.

There is a fascinating incident that occurred approximately 100 years ago. A Quaker mother used to read bible stories to her little boy, an odd-looking child with a funny looking nose. She read him stories about ancient Israel’s battles with their enemies. Suddenly she turned to the child and said, “One day, you will have an opportunity to save the Jewish people. Don’t let it pass by…”

Fast-forward to October 1973. A political leader makes two critical errors in judgment: (1) she ignores the advice of her general staff to mobilize the army because Sadat’s armies are ready to invade, and (2) she announces not to worry-”Anu botchim bekochot tzahal-We trust and believe in the powers of the IDF.” The second error is more critical than the first.

To the shock of the entire world, the much-vaunted IDF is crushed in two frontal attacks, from the south by Egypt and from the north by Syria. The prime minister of Israel contemplates suicide. Plans are drawn to maintain a government in exile. And a phone call is made at 3 o’clock in the morning to the president of the United States. “Please, if you do not help us now with an airlift, it will be the end of Israel. It will be the end of the Jewish people.”

He then ordered the second-largest military airlift in the history of the world. This is Divine providence… This is something that every Jew, no matter how uninterested in Judaism, and no matter how far from home, knows deep down in his heart is true. This is the inner meaning of Pesach-a one-night refresher course in emunah, a refresher course that applies to every Jew, containing a mitzvah that has no limit.

We imagine that the rabbi then turned to the father and the son and said, “This is how the night of Pesach is different from all other nights, and it would behoove you both to allow its message of our nation’s emunah to enter inside you.”