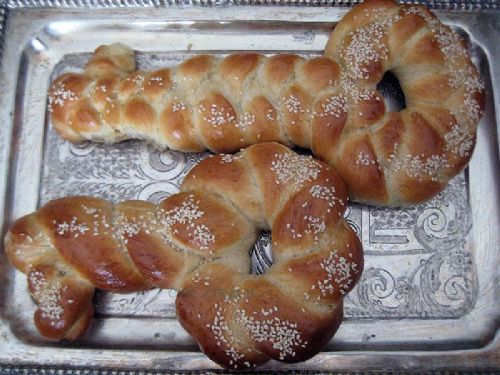 The custom of Schlissel Challah has become very widespread, not only in the Chassidish world but in many other communities as well. A few years ago, an article the influence which is still being felt appeared that attempted to connect the custom known as Schlissel Challah to Christian or pagan sources. It was written by a Mr. Shelomo Alfassa, entitled “The Loaf of Idolatry?” It stated that fulfilling this custom was, in fact, a Torah violation of following in the ways of the gentiles. In this article, an attempt will be made to trace the origins of the custom and to examine the alleged connection to non-Jewish sources that appeared in the Alfassa article. It is this author’s contention that the allegations are quite spurious, error-filled and misleading, and have no connection whatsoever to this Chassidic custom.

As far as the sources for Schlissel Challah, Alfassa writes as follows:

“While the custom is said to be mentioned in the writings of Avraham Yehoshua Heshel (the “Apter Rav” 1748-1825) and in the Ta’amei ha-Minhagim (1891), there is no one clear source for shlissel challah. And while people will say there is a passuq attributed to it, there is not. And, even if there were, a passuq that can be linked to the practice is not the same as a source… The idea of baking shlissel challah is not from the Torah; it’s not in the Tannaitic, Amoraitic, Savoraitic, Gaonic or Rishonic literature. Rabbi Shlomo Aviner of Israel’s Yeshivat Ateret Yerushalayim said that while baking challah with a key in it is not forbidden, “there is no meaning in doing so.”

While Alfassa is correct in his assertion that the custom is not found in the writings of the Rishonim or earlier, for some reason he fails to point out the Chassidic origin of Schlissel Challah. As a general rule, we do not find Chassidish customs in the Rishonim because the movement itself only began in 1740. We, however, do find mention of the custom to bake Challah in the shape of a key in many, many Chassidish Seforim. These Seforim were written by genuine Torah scholars, and it is difficult to propose that a Christian practice somehow entered into their literary oeuvre. The Klausenberger Rebbe, the Satmar Rebbe, the Belzer Rebbe, Rav Moshe Aryeh Freund, and numerous Chassidishe Rebbes and Poskim all punctiliously observed this custom.

Most of the reasons have to do with the Kabbalistic notion of “Tirayin Petichin” that the gates to Heaven are opened. This concept of opened gates is found throughout the Zohar and is discussed by such authorities as the Shla (whose father was a student of the Remah).

The earliest reference is in the works of Rabbi Pinchas Shapiro of Koritz (born 1726), a descendent of the Megaleh Amukos and a student of the Baal Shem Tov. In his work called Imrei Pinchas (#298) he explains that the reason to bake Schlissel Challah on the Shabbos following Pesach is that during Pesach, the gates to Heaven were opened and remain open until Pesach Sheni. The key alludes to the fact that these gates are now open and that we should focus our prayers ever more on that account.

The Apter Rebbe, author of the Ohaiv Yisroel (Likkutim al HaTorah Pesach), mentions the custom as well but provides a slightly different reason. He writes that the gates to Heaven were opened to our prayers the entire Pesach and we must now re-open them with the Mitzvah of our Shabbos observance. Although Alfassa writes that there is no Pasuk that is referenced for this custom, the verse does indeed exist and is mentioned in the Ohev Yisroel itself.

In Shir HaShirim 5:2, which is read on Shabbos Chol HaMoed the verse states, “Open for me, my sister..” Chazal darshen (Yalkut Shimoni Shir HaShirim 988), “You have become My sister with the observance of the two Mitzvos in Egypt the blood of the Korban Pesach and the blood of Bris Milah..Open for Me an opening like the eye of the needle and I (Hashem) shall open for you like the opening of a wide hall.” The Ohev Yisroel mentions two other reasons for the custom, primarily that Hashem should open His “store house of plenty” for us as He did in Iyar after the exodus.

The Belzer Rebbe (Choshvei Machshavos p. 152) provided the explanation that although the Geulaha may not have happened yet as it was scheduled to occur on Nissan, at least the key to Hashem’s storehouse of parnassah and plenty have been opened.

The Taamei HaMinhagim (596 and 597) provides a number of reasons as well.

Alfassa writes that “at least one old Irish source tells how at times when a town was under attack, the men said, “let our women-folk be instructed in the art of baking cakes containing keys.” This is Alfassa’s lead reference, but looking up his reference (O’Brien, Flann. The Best of Myles. Normal, IL; Dalkey Archive Press, 1968. Page 393) reveals that it is not really an old Irish source. Rather it is a quote from the fiction works found a collection of Irish newspaper columns that date back four decades before the publication of the book. In other words, there is no correlation between this 20th century literary statement and a custom that dates back to Eatsern Europe centuries earlier.

Let’s now look at the second reference that Alfassa brings. He writes citing a book written by James George Frazer, entitled The Golden Bough. London: Macmillan and Co., “Another account mentions a key in a loaf: “In other parts of Esthonia [sic], again, the Christmas Boar [cake], as it is called, is baked of the first rye cut at harvest; it has a conical shape and a cross is impressed on it with a pig’s bone or a key, or three dints are made in it with a buckle or a piece of charcoal. It stands with a light beside it on the table all through the festival season.”

The fact is, however, this source does not mention a key in a loaf at all. It mentions a cake with a cross on top of it. How was the shape of the cross made? Either with a bone of a pig or with a cross shaped key. There is no parallel to the Schlissel Challah here whatsoever.

Alfassa further tells us in a footnote, “Small breads with the sign of the cross have been found as far back as 79 CE in the ancient Roman city of Herculaneum (see The New York Times March 31, 1912). This was when Christianity emerged in Roman Judea as a Jewish religious sect which gradually spread out of Jerusalem.

This footnote as well is extremely misleading. The city of Herculaneum located in the shadow of Mount Vesuvius was destroyed on August 4th, in the year 79 CE. At the time it was an entirely pagan city where they worshipped Hercules, and were assuredly not Christian. There was no influence on Judaism here, nor a connection to Christianity as Alfassa implies because the entire city was buried in volcanic ash, and they were not influenced by Christianity. The connection to Schlissel Challah here is completely non-existent. More likely is the fact that the “plus sign” was actually an icon before the identification of the cross with Christianity. Also connecting the shaping of a plus sign with the Schlissel Challah in this instance is quite spurious.

Alfass further attempts to connect the practice with the idea of placing figurines in cupcakes. He writes, “Similar, there are modern non-Jewish customs, such as in Mexico, where a ‘baby Jesus’ figurine is baked into cupcakes; often, the child who finds it wins a prize. This is also practiced in the U.S. state of Louisiana beginning at Mardi Gras and practiced for 30 days after. There, a ‘baby Jesus’ toys baked into a whole cake, and whoever finds the baby in their piece has to buy the next day’s cake. In Spain, there is a tradition of placing a small Jesus doll inside a cake and whoever finds it must take it to the nearest church..”

In conclusion, there is no evidence whatsoever that this Chasidic custom was derived from or influenced by Christian practice. The scholarship behind this allegation is faulty and error-filled. This is a custom that has been practiced by the greatest of our Chasidic brethren and it is wrong to cast such aspersions on their practice.