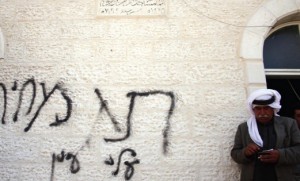 It would appear the vandalism attacks that are now labeled ‘price tag’ attacks are becoming increasingly frequent, especially in northern Israel. Police report that on Wednesday, 7 Iyar 5774, the dentist of a member of the Druse community located in Yokneam was targeted in a hate attack. On the other side of the hate spectrum, in the Menashe Regional Council, swastikas were painted in a number of areas.

In the Yokneam attack, police report the dentist office was targeted for the second time in as many weeks. In the latest attack the front window was smashed and graffiti including “price tag” was found on the scene.

Police working with the ISA (Israel Security Agency – Shin Bet) report the arrest of a 25-year-old resident of the city, a person who did not have a criminal record. He was apprehended as he was slashing the tires of a vehicle that belongs to an Arab building contractor. Police are trying to tie him to the slashing of tires of at least ten Arab vehicles in that area during recent weeks.

In the Pardes Chana area of northern Israel, which is within the judicial confines of the Menashe Regional Council, police found swastikas painted in a number of areas.