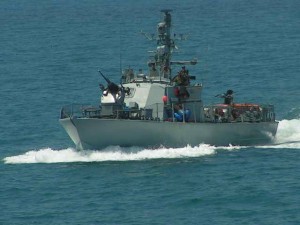 Prime Minister Binyamin Netanyahu was surprised last week when he received a private letter from German Chancellor Angele Merkel. In her letter she explained that despite an earlier agreement, her country was going to charge Israel full price for battleships being constructed for the Israel Navy.

According to Maariv correspondent Ben Caspit, Israel believes the US may be behind the action, persuading Germany to punish Israel for the breakdown in talks with the PA (Palestinian Authority).

The letter arrived in Jerusalem on Israel’s 66th Independence Day, referring to three special ships being constructed to permit the Israel Navy to protect three gas rigs in what is being referred to as the “economic waters” in the Mediterranean. The report adds that the same vessels can be manufactured in other countries too, including S. Korea, Italy and the United States.

During her visit in February 2014, Prime Minister Binyamin Netanyahu told Merkel Israel would not shop around on the international market to build the ships for as long as Germany would give a substantial reduction in price. The deal involves a respectable sum amounting in the hundreds of millions of euro. Things have changed and Germany is backing out of the deal so Jerusalem may release an international tender that may result in the order going to another country.

Maariv quotes sources angrily responding, “Germany sells billions in weaponry to countries including Saudi Arabia, Algeria, Egypt and others, countries that are blind to human rights and democracy. But now Germany decides to punish Israel and chose to notify us on Independence Day”.

Merkel has not hid her disappointment surrounding the failed talks, placing most of the blame on Prime Minister Binyamin Netanyahu, not the PA. This leads some to believe that the chancellor acted on her own, without any US involvement towards backing out of the deal.

Maariv quotes another senior individual anonymously, who explains it may not be that simple since in order for Germany to grant such a sizable reduction in costs it must obtain approval from its parliament and perhaps Merkel realized it would not pass.

From the Israel Navy perspective ships from Germany would be preferable however the clock is ticking and the order is already delayed. Officials here believe the tender will be opened and offered to ship builders in the other countries in the hope of finding a more reasonable deal.