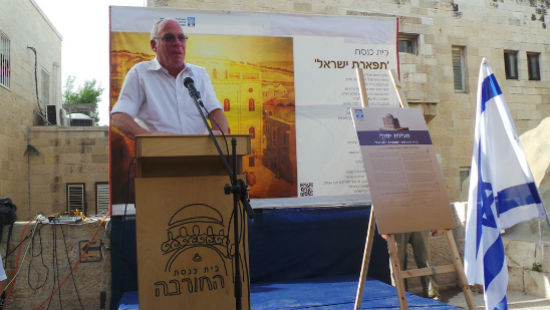 In a ceremony held on Tuesday night the eve of 28 Iyar 5774, Yom Yerushalayim, a cornerstone for the Tiferes Yisrael Shul in the Old City of Yerushalayim was set into place.

The Tiferes Yisrael Shul was established in 1872 and it was the pride of the Old City alongside the Churva Shul until 1948 when they were destroyed by the Jordanians. The shul will now be rebuilt in a complex engineering feat after archeologists announced they are done excavating the area. The excavations revealed artifacts from periods of Bayis Rishon and Sheni. The Churva Shul was rehabilitated in 2010.

In his remarks during the ceremony the minister said “We will not permit another building freeze anywhere in Israel, particularly in Jerusalem”.

Mayor Barkat stated “We are now laying the cornerstone of one of the symbols of the Jewish community in Yerushalayim throughout the ages, symbolizing the connection between us and Jerusalem that has not been broken over the ages. A few years ago we inaugurated the Churva Shul which was magnificently rebuilt and today we are proud to begin to do the same for the Tiferes Yisrael Shul. City Hall attaches great importance to the preservation and restoration of heritage sites of Yerushalayim, and we will continue to maintain the heritage of Israel in Yerushalayim”.