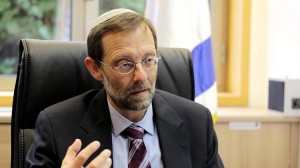 Feiglin began by sending his best wishes for the safe return of the boys to the families of Eyal Yifrach, Gilad Shaar, and Naftali Frenkel. Feiglin then praised security forces and Prime Minister Binyamin Netanyahu for their ongoing efforts to bring the boys home.

Feiglin declined to respond to comments that the boys hitchhiked despite IDF instructions to residents not to do so. He stated the real question is not why anyone takes a ride but why has taken a ride become a dangerous practice and why stores require security and why has the security situation deteriorated to today’s reality.

A friend and community resident of one of the boys told Channel 10 News earlier that to begin seeking to place any measure of blame on the boys for hitchhiking is absurd. She added that transportation throughout Yehuda and Shomron is limited at best, and taking rides is a necessity and part of life for most residents of yishuvim, particularly the young. The resident told reporters that blaming people who take ride is tantamount to blaming a rape victim for the attack perpetrated against her.