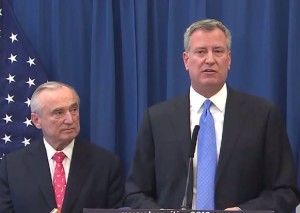 The Islamic State of Iraq and the Levant has already captured a pair of major Iraq cities and is threatening its capital.

A U.S. official said this week that its leader, Abu Bakr al-Baghdadi, said “I’ll see you guys in New York” when released in 2009.

Some believe this signals intent to strike the nation’s largest city.

De Blasio said city officials are “aware of the statements” that the suspected terrorist made.

He said they “don’t take any threat lightly.” And he says that the NYPD has been in contact with federal authorities.

There has not been a specific recent threat made against New York.