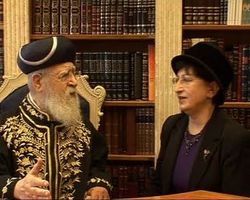 Mrs. Adina Bar-Shalom’s chareidi college is experiencing difficult days as the institution is in debt for 6 million shekels. After the collapse of Lander College and the expected closure of Makor HaMayanot, it now appears Mrs. Bar-Shalom’s college is worse off than the others, Yediot Yerushalayim reports.

The report says that enrolment in the college is down significantly and the Israel Prize recipient and daughter of Maran HaGaon HaRav Ovadia Yosef ZT”L is having a difficult time keeping her chareidi college afloat.

The report states the Ministry of Education has assigned the accounting firm to oversee the school’s finances. In the meantime, Bar-Shalom is reportedly out of the country on a fundraising mission.

The Kalman V advertisement company has announced it is stopping to work with the college due to a significant debt of hundreds of thousands of shekels.

College officials respond, stating the report is inaccurate. The statement speaks of a “planned strategic change intended to permit the college to face today’s new challenges and achieve new goals” as well as addressing efforts to cut operating costs.

“At times a more professional CEO is required, or a different advertisement firm with more expansive experience. There is no ‘giant debt’ as indicated in the article but due to a change in budgeting regulations an accounting firm is required to assist administrators in making the transition…”