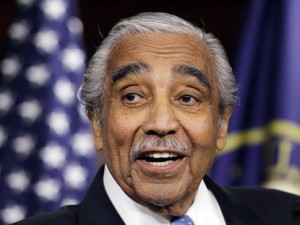 After nearly half a century in office, Rep. Charles Rangel emerged from a bruising primary in his self-proclaimed last campaign squeaking to victory — and trumpeting it.

With 100 percent of the vote counted in unofficial results, Rangel led state Sen. Adriano Espaillat 47.4 percent to 43.6 percent, a difference of fewer than 2,000 votes. While the official vote count in the Democratic primary won’t begin until July 2, The Associated Press called Rangel the primary winner based on information Wednesday from the city Board of Elections on ballots cast that were not included in the election night tally. The number of absentee and provisional ballots was not sufficient for Espaillat to make up the difference.

“Fired up and ready to go!” Rangel declared in a statement, though Espaillat hasn’t conceded, and his team has said it could mount a legal challenge. His campaign declined to comment Wednesday.

Rangel already had declared victory Tuesday night after an offbeat, nearly hour-long session of what he called “sweating it out” with supporters — a sort of political variety hour, complete with stream-of-consciousness remarks, Q-and-A with advisers about the latest vote totals and tributes from a parade of supporters.

It was anything but an ordinary election night speech in an era of staying on-message. But his unorthodox approach reflected the political persona he has developed in 22 terms and, perhaps, an 84-year-old lawmaker’s desire to savor the moment as his campaigning days close, political experts say.

“Politics are now so scripted that few candidates are willing to go off-script,” said Tom Hollihan, a University of Southern California professor who specializes in political communications. But “at this point in his life, he’s kind of earned the right to be a little quirky.”

For nearly two hours after the polls closed, Rangel stayed out of sight as he waited and pondered odds, geography and demographic variables of victory and defeat. He wondered whether his heavily Democratic Upper Manhattan district, once a black stronghold but now mostly Hispanic after being redrawn in 2012, had split along demographic lines as he faced Espaillat, a veteran state lawmaker seeking to become the first person born in the Dominican Republican to be elected to Congress.

“I was scared as hell,” Rangel recalled later. “The numbers weren’t going right.”

Espaillat, 59, lost to Rangel in 2012 by about 1,000 votes in results that took two weeks to finalize. Rangel, once arguably the nation’s most influential black elected official, had been weakened after 2010 ethics violations forced him to give up the chairmanship of the powerful House Ways and Means Committee.

As Tuesday night went on, with barely half the precincts counted and the 11 p.m. newscasts under way, Rangel decided he wanted to be with his supporters. Filibustering against an uncertain vote count, he talked at times about moving the Statue of Liberty to Upper Manhattan’s Washington Heights neighborhood (“where it belongs”) and fighting to protect New York’s view of the Palisades in New Jersey.

Few politicians would try his approach, but Rangel had gone off-the-cuff before in the campaign. During a May debate, he pretended to take a cellphone call, getting in some zingers about his opponents while talking to the phantom caller. It got him laughs, not laughed off the stage.

“No political adviser would ever suggest doing anything like that,” Fordham University political science professor Christina Greer said, “except for the fact that he pulled it off.”

As he left the stage, Rangel recalled telling his wife that morning: “Honey, this is the last time I’m going to be voting for me!”

By Wednesday, he had voted for a winner.