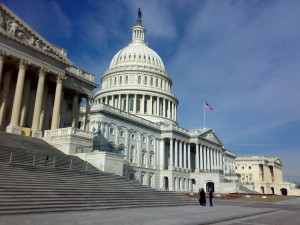 Does anyone in politics dare talk up the economy? Apparently not.

After five months of steady job growth and with unemployment hitting a six-year low, the reaction in Washington Thursday was a collective “Yeah, but …”

Across the political spectrum, liberals and conservatives still found reason to despair and point fingers — a function of election-year politics, been-there-before skepticism and honest perceptions by many Americans that the recovery has yet to improve their lives.

Consider this from Democratic Sen. Amy Klobuchar of Minnesota: “Too many working families are still treading water. Our focus now must be on solutions that strengthen the middle class and give more hardworking Americans a fair shot by raising the minimum wage, making college more affordable, and investing in workforce training.”

And this from Republican Party Chairman Reince Priebus: “We’re glad to see some Americans found work last month, but we can’t rest until jobs are easy to find. That’s why Republicans have passed dozens of jobs bills in the House of Representatives. Sadly, Democrats in Washington, D.C., have other priorities.”

Even President Barack Obama, who would be eager to take credit for an economy on the mend, felt compelled to throw in a dampening caveat as he drew attention to the 288,000 jobs created in June, to the lower, 6.1 percent unemployment rate and to the fastest job growth since 1999.

“As much progress as has been made, there are still folks out there who are struggling,” he said Thursday. “We still have not seen as much increase in income and wages as we’d like to see. A lot of folks are still digging themselves out of challenges that arose out of the Great Recession.”

To be sure, there are real economic reasons to be wary, or at least not euphoric, over the most recent report.

The labor market remains weak, with a labor force participation rate stuck at 62.8 percent, the lowest since 1978. Construction jobs reached their highest level since June 2009 but are still more than 1.7 million jobs below their 2006 peak, according to an analysis of jobs numbers by the Associated General Contractors of America.

Moreover, hiring has tended to be predominantly in low-wage jobs, leading to stagnant wage growth, and the number of hours worked per week has not changed. Gains in paychecks are small enough that they can be wiped out by inflation. “The headline number masks the lingering structural weakness in the U.S. labor market,” said Lindsey Piegza, a chief economist at the Sterne Agee brokerage house.

“Even if we saw June’s rate of job growth every month from here on out, we still wouldn’t get back to health in the labor market for another 2 1/2 years,” said Heidi Shierholz of the liberal Economic Policy Institute.

More important, beyond those statistics, are public perceptions of the economy.

An Associated Press-GfK poll in May, found that the share of those surveyed who called the economy “good” stood at 34 percent, while 65 percent described it as poor. That’s about the same as it has been all year, though slightly above where it was during the partial government shutdown in October. Few expected improvement in the economy over the next 12 months, and more expected it to get worse.

The perceptions have a partisan hue, as well.

Economic confidence as measured by Gallup found Democrats had the highest and Republicans the lowest.

In the face of that, politicians are not likely to cheer an economic number.

What’s more, Democrats and Republicans want to blame each other for not enacting policies they say would create more jobs. So Obama complains about Republicans not increasing the minimum wage and Republican House Speaker John Boehner says Obama has failed to lead on issues such as trade and workplace flexibility.

“In order for us to make real progress, the president must do more than criticize,” Boehner said.

With the economy still emerging as the top issue of the day with a plurality of voters, each side will continue to brand the other as uncompromising obstructionists. And even if the economic trends show improvement, the fall campaign season may be coming too quickly to change the battleground.

“It takes a long time for economic statistics to be felt in people’s pocketbooks,” Ayres said. “It may be too late at this point to affect the political environment of the midterm elections.”

Indeed, neither side has an incentive to tout much progress.

“For Republicans, the reality is that they are not going to want to give credit for anything that Obama should be credited for,” said Ken Warren, a political scientist and pollster at St. Louis University. “As for Democrats, when the public feels some way in the polls and it’s not going to play well, even the Democrats in this case would see a downside.

“To contradict what the people think can be perceived as liability.”