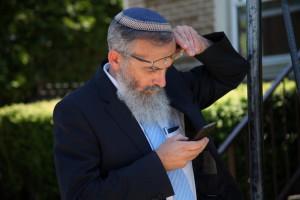 The head of Tzohar Rabbonim Rabbi David Stav is pointing an accusing finger at Arab religious leaders. He suggests they take a good look at the response from Jewish leaders to murder in recent days.

The rav joins many other rabbonim in condemning the murder by Jews of a 16-year-old Shuafat youth. “There is not a rabbi in Israel who is not calling for a harsh sentence for those responsible for the murder of the Arab youth. How many similar condemnatory statements were heard of late from Islamic religious leaders” he stated.

The rav explains Tzohar Rabbonim accuse Arab religious leaders during these difficult days of failing to condemn the murders of the kedoshim HY”D.

“It appears everything was said to condemn the loathsome prohibited heinous revenge that led to murder and therefore, in an act that is so non-Jewish or humane, an act that embarrasses us worldwide, it is worth noticing the difference between what is happening in the Israeli society and among our enemies”.

Rabbi Stav points out every rabbis is calling for the full weight of the law against the murderers of Muhmad Abu-Khenin, questioning how many similar calls were heard from Muslim clerics regarding the murders of Gilad Shaar, Naftali Frenkel and Eyal Yifrach.

The Tzohar Rabbinical Council released the following statement to the media: “we express shock and disgust over the possibility that a Jew could have murdered the Arab boy. Such an act is contrary to the prohibition against murder, which was given to us at Har Sinai and carried down in Jewish Halacha over the generations and a fundamental of human morality. The act leads to a blasphemous Chilul Hashem and of Toras Yisrael throughout the world. Our justified demand to bring the murderers of the three youths to justice for their actions does not in any way justify this vile act and we demand the government bring these criminals to justice as quickly as possible”.