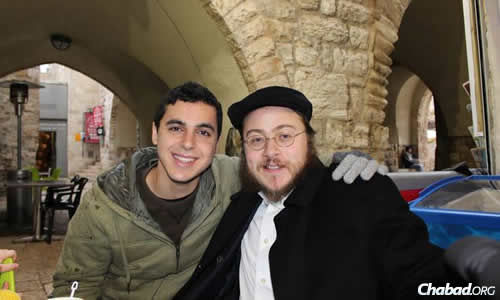 The cell phones had stopped working. There were so many people in attendance at the funeral of the “Lone Soldier” from Texas, that the cell towers stations could not handle the overload. Indeed, the road infrastructure to the cemetery in Haifa could not handle the traffic either, and thousands of cars were sent back.

Sean Nissim Carmeli a”h was a young Texas native who moved to Israel to protect his people. He was among 13 Golani brigade soldiers killed in combat on Sunday morning in the Gaza Strip. Sean was buried at the military section of the Nevei David cemetery in Haifa.

No one had expected so many to come. But they did. And there were all types. The entire spectrum of Israel was there, from the Chareidi, to the Nanas, to the secular and to the religious Zionists. Young and old, men, women, and children too. “The police had no idea what to do with such crowds ,” remarked Peter Berger, who had travelled close to two hours to come to the Haifa funeral. “There were cars as far as the eye could see,” said his wife.

The police had estimated the crowd in attendance at 18,000 and many other thousands had been turned away. “There is simply no more room, remarked a guard who was turning cars around.

And during the funeral, there was sweeping silence. Just silence, out of a sense of awe and hakaras hatov for someone who paid the ultimate price protecting his people. The Kel Maleh Rachamim opened the flood gates of tears. It was followed by a three-gun salute for this brave American from Texas who colunteered as a soldier to fight for his people.

They had come to mourn. But some had come for additional reasons. A young lady was handing a package to a group of Golani soldiers who had come up North for the funeral of their comrade. The package was prepared by the Yeshiva students of Shaaluvim. It contained food items and socks, what every soldier on the front lines requires.

An American lawyer, David Shaked, passed two Chareidim as he tried entering the cemetery walls. He asked them, why they thought there were so many people who came to a Lone Soldier’s funeral? They answered him simply, “Am Yisroel.” The clear implication was, “What kind of question are you asking? This is what the nation of Israel is all about!”

Yael Kleinberg said, “It was amazing to see all these numbers – especially considering the very late hour.”

His brother’s eulogy said, “Nissim taught us all how to love Eretz Yisroel.”