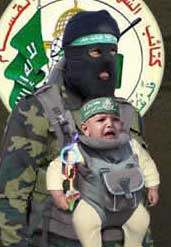 As the world turns their back on Hamas’s use of Human shields, it is astonishing how criticism is even possible to be leveled at Israel. Accounts from IDF soldiers tell YWN  of Palestinians throwing their children deliberately in harms way to rack up the casualty count. The Antisemitic media feed into the Palestinian narrative and completely leave out the fact that the parents are the ones to blame for their children’s fate.

Prime Minister Netanyahu was not exaggerating when he said “this is the most grotesque war I have ever seen”. He was referring to Hamas’s use of human shields. Testimonies from wounded IDF soldiers in hospitals relay detailed accounts of young children in Sheijaya, Gaza, being sent out into the streets with guns to try to attack IDF troops.

Another soldier described a scene where a  terrorists had run at IDF soldiers with a gun in one hand and a baby in the other, apparently in hopes that the soldiers would see the child and hold their fire. If soldiers fired, he added  the child’s death could be used as propaganda against Israel.

Hamas has openly boasted about the “success” of its strategy of using civilians as human shields during Operation Protective Edge.