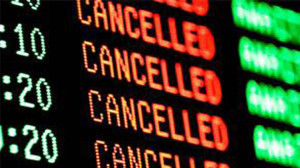 US flights to Israel will continue to be banned for another 24 hours amid security concerns, the FAA announced Wednesday. The move extends the flight suspension set Tuesday after a rocket fell near the Ben Gurion International Airport in Tel Aviv. The NOTAM, or notice to airmen, prompted several international carriers to follow suit yesterday, sending thousands of fliers scrambling to change their plans. Meanwhile, US Airways/American Airlines announced it would resume service to Israel on Thursday, pending FAA approval.