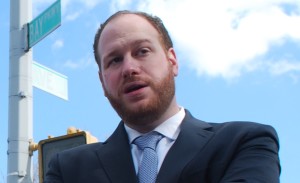 As acts of anti-Semitism are sweeping across Europe Councilmembers Dan Garodnick and David Greenfield are taking a clear stand that this sort of violence is not welcome in New York City and strongly condemn the vicious actions of the individuals responsible for the hate crime committed Monday evening against a young Jewish couple walking along East 63rd Street in Manhattan.

The NYPD reports that the couple was walking down the street when a car pulled up bearing Palestinian flags, shouted anti-Semitic remarks and threw a water bottle at the woman’s head. In defending his wife the husband was punched in the head by his assailants. The couple, who live in the neighborhood, reported the incident to the NYPD who has their Hate Crimes Task Force investigating the attack. Councilman Garodnick, who represents the community in the City Council, and Councilman Greenfield stand together to shine a light on this hate-driven act and send a clear message that hate crimes are never tolerated in our city.

“Last night’s apparent bias attack on the Upper East Side has no place in this area or anywhere in New York City. I expect the NYPD’s Hate Crimes Task Force and the 19th Precinct to conduct a thorough inquiry to bring the perpetrators of this assault to justice quickly. This kind of hate-fueled violence in New York City cannot stand,” said Councilman Dan Garodnick.

“We must break the pattern of hate filled violence against the Jewish community. We have zero tolerance for these hate crimes in our City, I urge anyone who may have information related to this upsetting attack to come forward so we can catch these criminals,” said Councilman Greenfield.

Anyone with information about this incident is urged to contact the NYPD’s anonymous Crime Stoppers Hotline at 1-800-577-TIPS.