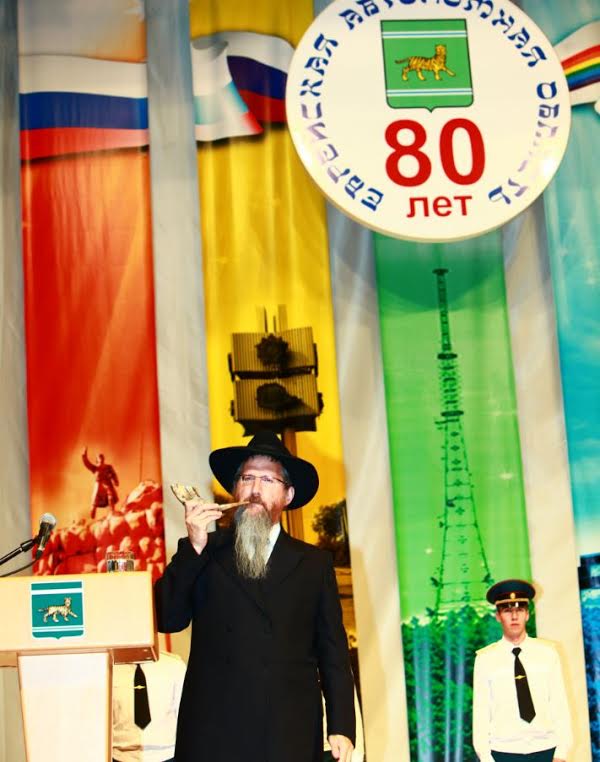 Several religious events, in conjunction with event ahead of Rosh Hashanah and the Yamim Noraim, were held recently in the Far East of Russia, led by Russia’s Chief Rabbi Harav Berel Lazar Shlita and attended by thousands of local Jews.

Every year, the chief rabbi embarks on a special trip strengthening Yiddishkeit and encouraging Russian Jews to Torah and mitzvos in cities and counties across the Russian state.

The journey began in the city of Khabarovsk, which is an eight-hour flight from Moscow.

In Khabarovsk, a hachnasas sefer Torah was celebrated, in conjunction with an event on to mark ten years since the building of the Great Synagogue in the city, and the renewal of Yiddishkeit in the city by Chabad shliach Rabbi Yaakov Snatikov.

Chief Rabbi Berel Lazar, shlita, toured the magnificent “Or Avner” education network, and met with the city’s Rabbi as well as the provincial governor who expressed his appreciation for the activities of the Jewish community and promised to continue assistance to the community.

In addition, the chief rabbi attended the government ceremony held to celebrate the end of World War II, attended by thousands of people, including Jewish Holocaust survivors.
The journey ended in the city of Birobidzhan – a Jewish autonomy established by Stalin for Russian Jews, some eighty years ago!

The Chief Rabbi also visited Jewish institutions in the city along with Chabad shliach Rabbi Eliyahu Reiss, who as a born local and graduate of the yeshivos in Moscow, and now inspires many thousands of Jews.

At the site, a reception was held, organized by local government, marking eighty years since the establishment of the Jewish autonomy, and the provincial governor also noted commend the burgeoning Jewish community activities in the city.