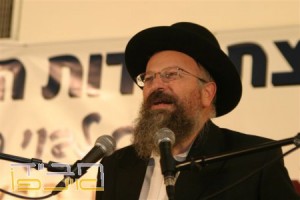 Tzfas Sephardi Chief Rabbi Shmuel Eliyahu Shlita is fuming over adverts for the Tzohar Rabbonim and the Giyur Bill listing his name among rabbonim who back the controversial legislation. Tzohar Rabbonim last week advertised its support for the Giyur Bill sponsored by MK Elazar Stern. The advertisement listed rabbonim who back the bill, including Rabbi Eliyahu, who is openly and adamantly opposed to the bill.

In an interview with the dati leumi Srugim website, Rabbi Eliyahu explained that his name taken without authorization as were the names of “many” chief rabbis of cities whose names appear even though they are opposed to the bill.

Rabbi Eliyahu adds that he is particularly shocked because he met with Tzohar leaders and they are well aware of his adamant objections to the bill. Rabbi Eliyahu explained that one of the “very prominent rabbonim who is indeed backing the bill is unaware of certain aspects of it that are halachically problematic”. He labels the actions of the Tzohar Rabbonim organization “irresponsible” and expects that he will be consulted in the future prior to using his name again.

When asked to comment on the advertisement, Tzohar officials explain that Rabbi Eliyahu’s name and the name of other chief rabbis of cities are included simply to explain to the tzibur that if the bill passes, in the future these rabbonim will be permitted to carry out giyur and one will not have to go to the Chief Rabbinate of Israel.