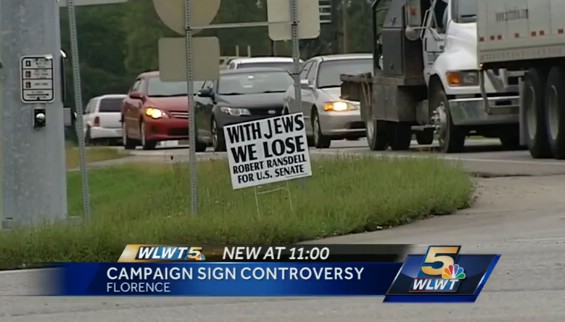 The following is via WLWT5:

A write-in candidate for the US Kentucky Senate is bringing his controversial message to voters.

Robert Ransdell said he knows he cannot win against Republican Mitch McConnell or Democrat Alison Lundergan Grimes but wants to use the campaign to spread his slogan, “With Jews We Lose.”

The signs placed at US 25 and Mount Zion Road in Florence caught one driver off guard.

“It’s ignorance. Complete ignorance and hate,” said Drea, who is disgusted with the campaign.

About 20 other signs are around Northern Kentucky and Ransdell said he hopes to roll out about 200 more in the coming weeks.

Drea, who wants to keep her last name private for fear of her family’s privacy, said she felt sick to her stomach after seeing the signs and wanted to speak out.

“I could drive by it and act like oh whatever it’s just some idiot but when does one idiot become 20,” Drea said.

Ransdell, who is out of town and campaigning, spoke to WLWT on the phone Tuesday night.

“Online we have had a lot of positive feedback. Like I said we’re going to find out what kind of feedback we get once we go out and take it to the people here in the state of Kentucky,” Ransdell said.

After receiving several calls on the signs, WLWT made sure the signs were legal.

According to a Kentucky statute, political signs are required to include the words “paid for by” followed by the name and the address of the responsible person or party. In this case there is no address shown.

Many residents said they wish the signs and his message would just go away.

“I believe that there is no such thing as racial equality. You see that in our cities everyday,” Ransdell said.