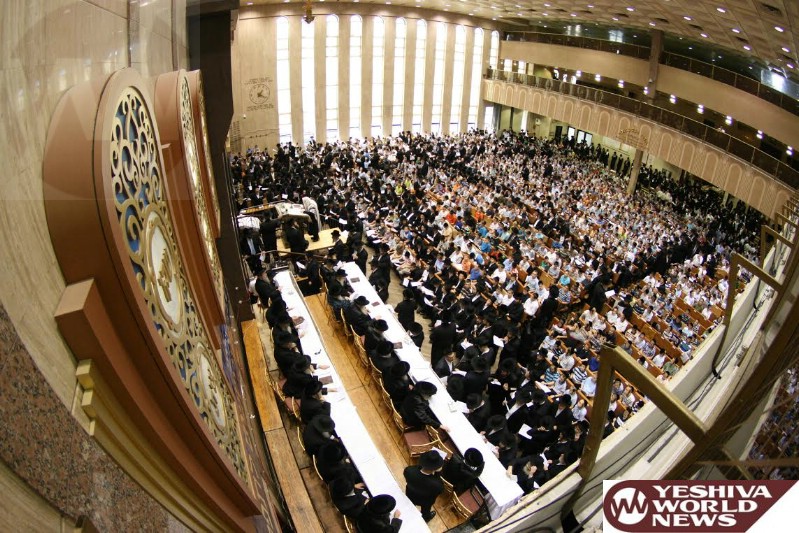 It is an event that unifies children from disparate backgrounds and from locations around the globe with the sole purpose of imploring the Ribono shel Olam to have mercy on the many sick Jewish children and others who need a refuah sheleimoh. The Tehilim Asifa, first launched in 1993 and in recent years organized and is run by Misaskim, will take place on Tuesday, the 6th day of the Aseres Yemei Tshuva, September 30th , at 1 p.m. in the huge Bobover Bais Medrash in Boro Park. In addition to the thousands of children from some 40 yeshivos who will participate at the main location, the proceedings will be broadcast via live hookup to many locations throughout the US and overseas. It will also be available live on Kol Mevasser 212.444.1100.

As in past years, this year’s Tehilim Asifa is expected to be an emotion-filled gathering with the highlight being the youngsters crying out in unison “Shlach Refuah Shelaima and Shma Yisroel”. Prior to that they will say tehilim as the names of the sick are scrolled on an adjacent wall and broadcast to all of the satellite locations. The children will recite six kapitlech tehilim on behalf of sick Jews (13, 20, 79, 121, 130, 142) followed by Mincha, Avinu Malkeinu, Shlosh Esrei Middos, Kabbolas Ohl Malchus Shomayim, and Oleinu. If you are not able to attend in person please take a few moments from wherever you are and join us in saying these kapitlech tehilim.

Well before the event, hundreds of names of the sick were called into the Misaskim headquarter and names were also submitted on Misaskim’s website as people seek the z’chus of the tefilos of tinokos shel beis rabbon for a refuah sheleimoh. To submit a name of a choleh you can visit their website www.misaskim.org. Like last year, the names of the sick will rotate on a huge screen and a mishebeirach made on their behalf.

“The tefillos of the children will no doubt reach the heavens and hopefully result in the full recovery of so many sick in our community, particularly children,” a Misaskim spokesman said. “The sight of thousands of children imploring the heavens for mercy for sick children and adults is heart-rending and a remarkable demonstration of unity in klal yisroel.”

For Misaskim, the mammoth event involves months of preparation and dozens of volunteers as the logistics of the event and its live hook-up to so many locations worldwide requires meticulous planning and preparation. Misaskim volunteers are known for their dedication and skilled attentiveness to detail, whether it is for a tehilim asifa or operating on the scene of a disaster. Misaskim is well known for its services to thousands of mourners who receive the required special furniture, sifrei Torah, and even air conditioners during the shiva period. It is also the major force in the community for preparedness for any possible disaster with a full team of volunteers as well as a sophisticated communications center and emergency equipment.