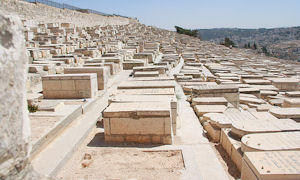 The latest Arab vandalism to kevarim on Har HaZeisim was in the Gur section, carried out on Shabbos. In a shocking realization it is reported border police arrived in the area but they admit they were not ordered to act so they permitted the destruction to take place.

When masked Arabs were seen arriving in the area police were summoned. The border police force arrived but since the policemen were not given an order to intervene, they stood by and watched the Arabs destroy matzeivos. Damage to an unspecified number of matzeivos is significant.