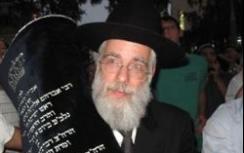 As the legal experts continue sorting out the eligibility of Rabbi Aryeh Stern as a candidate in the Jerusalem Chief Rabbinate race, Merkaz HaRav Rosh Yeshiva Rabbi Yaakov Shapira is expected to enter the race. According to the dati leumi kippa agency, amid the realization that Rabbi Stern’s candidacy may be disqualified, Rabbi Shapira is entering the race to become the next Chief Ashkenazi Rabbi of Yerushalayim. At present, the only other contender for that post is Rabbi Eliyahu Schlesinger Shlita, the rav/posek of the Jerusalem Religious Council and chief rabbi of the Gilo neighborhood of the city. Rav Schlesinger, considered the underdog, is the chareidi candidate for the position.

A recent Ynet report revealed that Rabbi Stern, who is the dati leumi community’s candidate and likely to win the election, does not have a valid written semicha. Therefore his candidacy may be disqualified.

Back in 2012 Rav Shapira’s name was mentioned as a candidate in a deal with Degel Hatorah. The deal was presented to HaGaon HaRav Yosef Sholom Elyashiv ZT”L. Degel was seeking to apply pressure on Shas to back an approved candidate. It is reported former Shas leader Eli Yishai traveled to Yeshivat Merkaz HaRav to offer Rav Shapira post. Nevertheless the deal did not work since Rav Stern was viewed as the dati leumi candidate and Rav Shapira did not wish to harm his chances of being elected.

The election is now set for 27 Tishrei. One can assume the challenge to Rav Stern’s eligibility will find its way to the High Court prior to the election. From the chareidi perspective, they only need another delay so Rav Stern celebrates his 70th birthday, guaranteeing he is disqualified by his age.

Kippa adds that if Rav Stern is indeed disqualified, Tzfas Chief Rabbi Shmuel Eliyahu Shlita is likely to join the race as the dati leumi candidate for the post of Sephardi Chief Rabbi of the city. Rav Eliyahu would have to run against Rabbi Chaim Amsellem, who is viewed by many as a dati leumi candidate but he is far less popular in that community than Rabbi Eliyahu.

Kippa adds that legal experts interviewed who are observing events feel the eligibility of Rabbi Stern is solid and efforts to discredit him based on his semicha are unjustified.