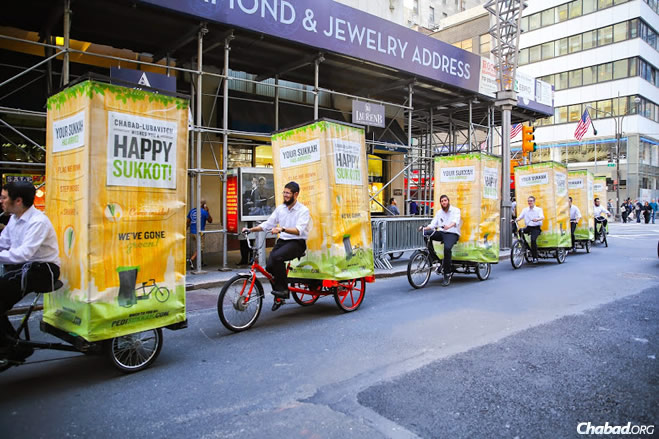 Look for Levi Duchman on a bike. Not just any bike, though. The 21-year-old Chabad yeshivah student in Brooklyn, N.Y., is riding around on a modified pedi-cab—an adult-sized, three-wheeled cycle (a tricycle, really) that instead of having a set of seats in the back attaches to various holiday accoutrements.

For example, there’s a sukkah for Sukkot, a giant dreidel for Chanukah and a year-round customized display with a Chabad greeting.

Meet the “mitzvah cycle.” And it’s hitting the streets again this holiday season.

There are 50 of these around the world, including in Canada, Denmark, England, Australia, Holland and France, as well as in 14 states in America. The bikes can be spotted in Michigan, Georgia, Florida and Tennessee, just to name a few locales.

And they tend to generate quite a buzz wherever they go. Duchman once had a flat tire that was fixed by fans on Manhattan’s Lower East Side. He’s taken his portable sukkah to the “Occupy Wall Street” protest and garnered interest there. He’s met all kinds of weather, sometimes traveling through the pouring rain. And yes, he does wear a helmet when in New York City traffic.

“This concept of going out and sharing with others really overcomes any weather, any situation,” he says. “We’re out there and pedaling away, and getting to our destination, meeting hundreds of Jews a day.”

In Copenhagen, Rabbi Yitzchok “Yitzi” Loewenthal, co-director of Chabad of Denmark, has put pictures of his bike—with the sukkah attachment—on Facebook.

“Of course, it generates a lot of excitement,” he says. Bikes are very popular in Denmark, he explains, with bike lanes on every street, and boxes in the front for carrying food or friends.

Duchman even printed him a sign in Danish on a special type of ventilated material that the wind can pass through, so the motion won’t slow him down. He offers Jewish individuals the chance to wave a lulav and etrog, say prayers and have a bite to eat.

As for the other types of attachments, Loewenthal hasn’t used them yet, though notes that they’re a definite possibility in the future. “I really like the idea,” he says.

Rabbi Ruvi New, co-director of Chabad of East Boca Raton in Florida, saw the bike advertised online and got one last year for Sukkot. “We are in a coastal area; it’s also a downtown area, so there’s pedestrian traffic,” he says, adding that the vehicle was a welcome alternative to a more full-sized truck.

In southeast Florida’s balmy weather, it can go to outdoor shopping centers and other places people congregate, and always seems to draw attention, he says.

“People, if they’re sitting outside a Starbucks, for example, will see it, and if they’re Jewish, it makes doing the mitzvah cool, sort of funky.” That makes it all that more appealing, according to the rabbi, who bikes around neighborhoods, pulling up in front of people’s homes to give them a chance to do shake the lulav and etrog, and do a mitzvah.

He has just the sukkah attachment now, but expects to add other components in the future.

“It jibes with Chabad’s perception of being innovative, and making Judaism accessible and fun,” says New. “I think it’s just a natural fit for the place. I think it’s a great thing to have.” He adds that the bike’s also a great workout for his older children—two teenage sons who like to ride it around.

Meanwhile, Duchman is fielding questions from near and far about the cycles, and their celebration-ready parts, which don’t need any special tools to install. For instance, he was asked if one day there will be a pedi-chuppah.

That remains to be seen, he responds. But even if he sticks with what he’s got, it’s all good.

“Every day,” he quips, “is another adventure.” 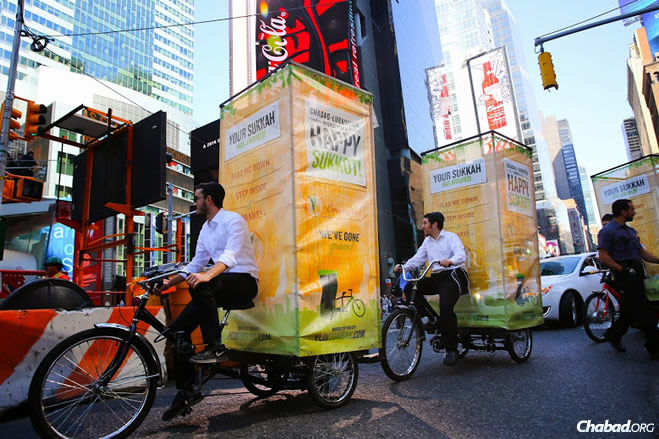 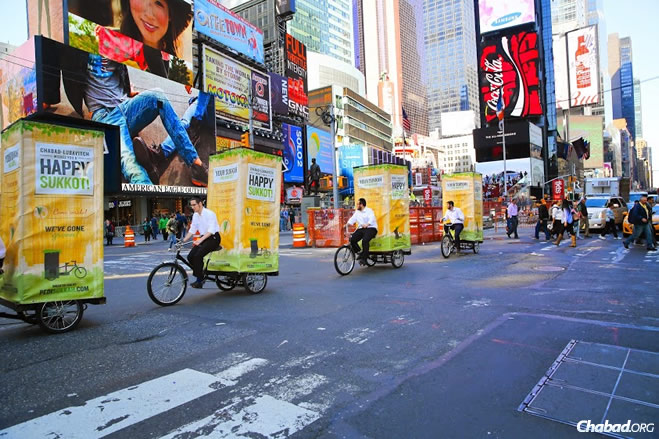 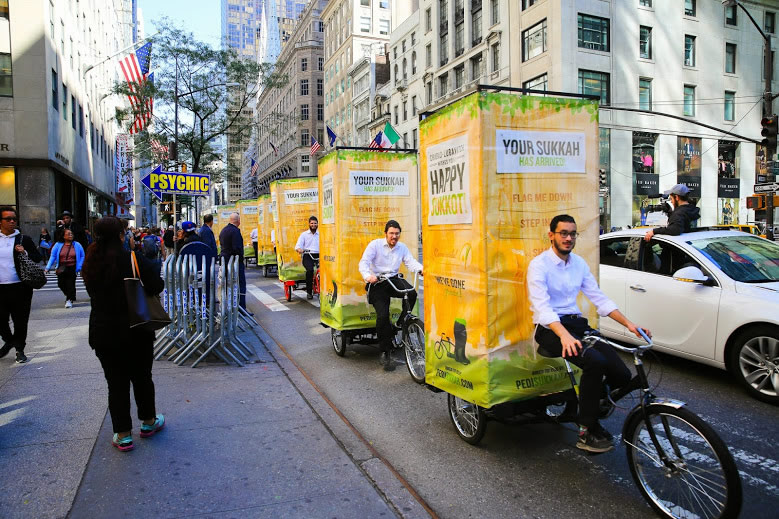 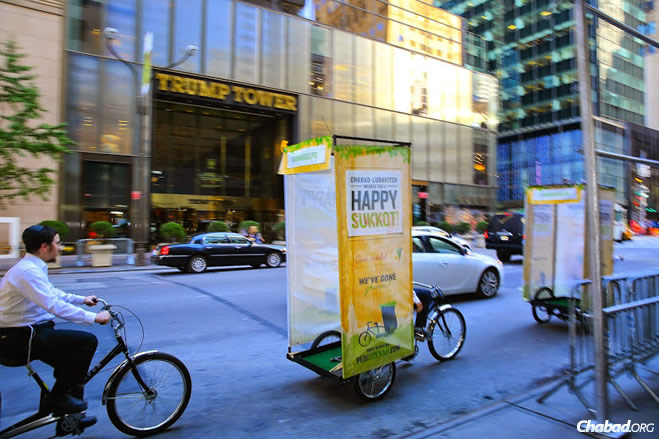 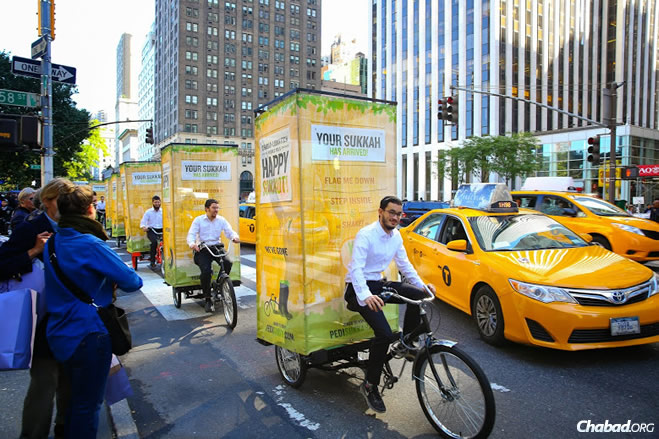 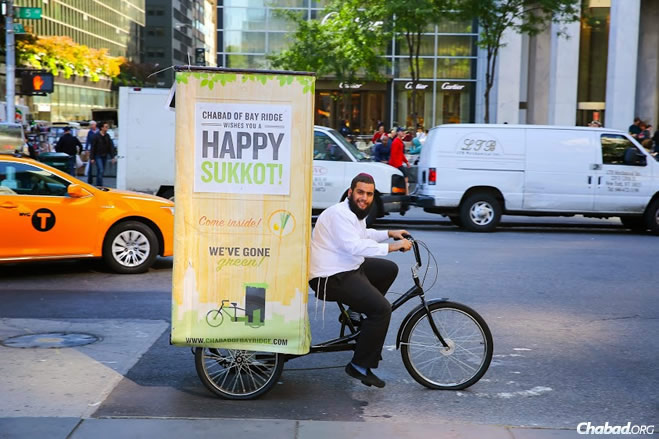 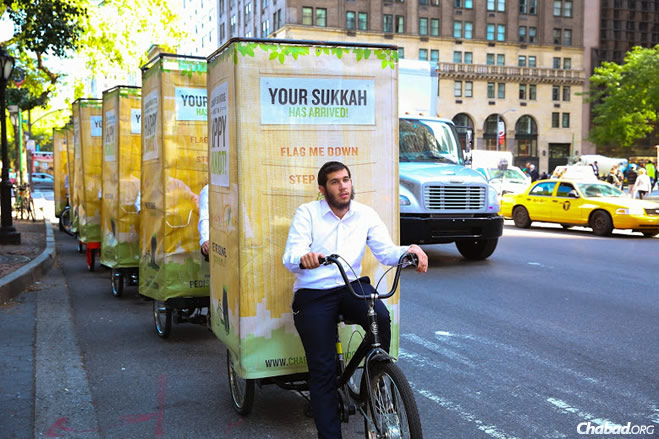