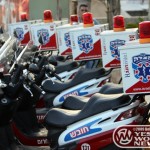 On Wednesday erev First Day of Sukkos an Ichud (United) Hatzalah ambucycle disappeared. EMT Aaron Klein, like other EMS volunteers is well aware the ambucycle is permitted into security areas and the fact that it disappeared resulted in immediate concern. The ambucycle was parked on Lenders Street at the Bnei Brak Ramat Gan border when it vanished.

Police are called in when such vehicles disappear as they are well-aware how such a vehicle can serve terrorists R”L. While Klein felt bad, he knew he took the appropriate measure as he locked the ambucycle to a pole prior to leaving the city in the morning to take care of errands.

As soon as he returned home on erev yomtov he reported the disappearance of the ambucycle on the radio and other area volunteers began combing the streets in the hope of recovering it. Realizing a search was taking place, a neighbor quickly ran out to bring them to his sukka, which he built during the morning hours while Klein was out of town. He explained that he managed to open the lock and walked the ambucycle to his sukka, using it as an added attraction. He thought doing so would be cool and incorporated the vehicle in the sukka theme.