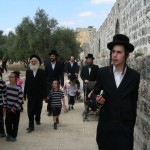 The rav had words of praise for the ongoing efforts of Israel Police, citing the need to maintain order to permit Jews wishing to visit the holy areas during yomtov to do so.

The rabbi explained we never heard of a holy site becoming a base for violence and in the case of Har Habayis, the site has become central towards advancing a political agenda and Har Habayis is not serving as a religious site as it should. He calls on the Arab leadership in the region to openly condemn the violence and to distance the instigators and participants in violence from the area.

The rav called on Israel Police to maintain order and take the necessary measures to permit Yidden to visit the Old City during the Sukkos week.