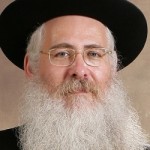 Ilan Kaminetzsky, who heads the dati leumi representatives on the voting body in the Jerusalem Chief Rabbinate race explains he cannot support Rabbi Moshe Chaim Lau’s Shlita candidacy for he is not a resident of the capital. Mr. Kaminetzsky explained to Kikar Shabbos News that it is simply a matter that they believe the rav elected to serve the people of Yerushalayim must be a resident of the city and not Netanya.

In response to statements from Rav Lau that he does enjoy support from the dati leumi community, Kaminetzsky added “The rabbi from Netanya is not a member of the dati leumi community but rather the Gerrer Chassidus and we do not plan to back his candidacy”. To drive the point home even further, Kaminetzsky feels that since the candidate’s brother is a Chief Rabbi of Israel and his father Chief Rabbi of Tel Aviv, his candidacy is not acceptable to him and his colleagues for too many family members are already holding positions.

Chareidim responding to the interview feel Kaminetzsky’s statements simply show the dati leumi community’s fear of losing the upcoming race. They feel that despite his statements the chances of Rav Lau emerging the victor in the election are high and that is why Kaminetzsky and his colleagues are fearful since they do not wish to see a chareidi elected, even one with good ties to all communities.