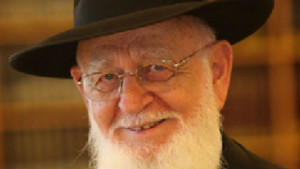 Chief Rabbi of Kiryat Shmona Rabbi Tzefanya Drori Shlita, an outspoken advocate of visiting Har Habayis, told the dati leumi Kippa website that he encourages Jews to visit the holy site. He rejects the notion that doing so is responsible for Islamic violence, explaining the Muslims simply looks for an excuse. Rabbi Drori is viewed as one of the leading poskim in the dati leumi community advocating visits to Har Habayis.

Clearly the issue of Jews visiting Har Habayis has topped the nation’s agenda as the Jews and Arabs and Jews and Jews are at odds regarding the right of Jews to visit and daven on Har Habayis. YWN-ISRAEL reminds our readers once again, that the Gedolei Hador throughout the generations have been and remain opposed to ascending to Har Habayis, as is the Chief Rabbinate of Israel.

“Visiting Har Habayis is a mitzvah Min Hatorah and for many years after the churban leading rabbonim including the Rambam and Ramban did so. When we are there we are close to the place of the Mikdosh and even now that it is gone, the kedusha remains. This has not changed for thousands of years and it will not change today. It is a mitzvah to visit Har Habayis” states Rav Drori.

Rabbi Drori explains that those rabbonim who forbid visiting Har Habayis have two reasons. They fear visitors do not know how to prepare properly and secondly, there are boundaries, areas that are halachically off limits and one who transgresses is punishable by karess.

The rav adds that in recent years there is an additional reason is that we are uncertain regarding the boundaries of the permitted areas and therefore, one may transgress unintentionally. Rav Drori explains this is not so and that we are aware of what areas are and are not permitted.

“The measurements of Har Habayis have not changed throughout the ages. We are aware of the size of the Azarah and there are clear signs demarking where it is permissible to go. Hence there is no basis for this view. If there is a problem, then one simply refrains from entering those areas. Therefore, today, there is no problem to come close to al-Aqsa Mosque since this is the area that King Herod added. If one enters further, one must toivel in a mikve and of course one cannot be carrying bags or shoes of leather. It is a great merit to be able to ascend Har Habayis”.

Rabbi Drori feels that if one does not visit Har Habayis today one is guilty of a serious transgression for we must yearn for the Mikdosh. “If we do not go others will usurp control as we are abandoning the site. Every person that ascends is considered a Shomer HaMikdash from occupation. This carries many heterim. Every person has this right and B”H there are many exercising this right” he adds.

Rav Dror then addresses those rabbonim who fear that some who visit will not properly prepare themselves and they will be tamei and this would have an adverse effect. “At the time we did not visit Har Habayis tourists did so in large numbers. Today, because of the religious worshipers visiting, they are learning to prepare themselves properly to prevent the prohibitions associated with ascending with preparing oneself as one must. Once upon a time persons visited without concern for areas and boundaries. I recommend that anyone with Yiras Shomayim to protest the unrestricted visitation by tourists to prevent compromising our holy site. There are very prominent rabbonim like Rabbi Dov Lior who is a profound talmid chacham, and other leading rabbonim, who permit visiting. There are people were are expert in Torah Law who permit ascending.

“Anyone who rejects ascending Har Habayis appropriates our rights to walk about freely at the Kosel and in the Old City” states the rav. “We are not going to fight the Arabs and they is no provocation. This has become normative Muslim behavior and require no stimulation to act as they do. The Arabs claimed in the past that visiting the Kosel was the cause of the violence and today, it is Har Habayis. When the Knesset was built they knew the world would resist but came to understand Yerushalayim is the basis of our neshama. If people do not understand this then they do not understand the history or the Torah and have no understanding of the People of Israel. They do not achieve more Yiras Shomayim by opposing ascending to Har Habayis but rather they strengthen our enemies.

“The violence did not begin with Har Habayis. The violence began with Yerushalayim with other matters entirely. What connection does this have with the place of the Mikdosh? These are lies and everyone is aware of this. They are not concerned with Har Habayis rather they object to the establishment of the State of Israel. They are unwilling to recognize the fact that Am Yisrael has a foothold in Eretz Yisrael”.

“Rav Kook explained to Rav Tzvi Yehuda when he met with the wise men of Islam the latter knew we would return to Har Habayis and that is our right. That is what Rav Tzvi Yehuda told me. All of the excuses and disturbances of Islam stem from the hated of Israel that we have returned home”.